Some of my favourite London and South Western Railway items that I own are my rule books. I have five of them, three general rulebooks that were issued to all staff in 1904, 1912 and 1921, two Appendix to the rule books dated 1911 and 1921, as well as a smaller book just for Engineering staff from 1902. I also have images of rule books dating back to 1845. OK so they don't sound that interesting, in fact they are, for the non-railway fan, a bit of a bore. But if you'll bare with me here I'll explain why I find them them fascinating.

Firstly they were issued to railway workers, who had to keep them about their person constantly and become fully acquainted with their contents. For this reason my 1921 Appendix belonged to a Mr N Smith who was based at Itchen Abbas station, and my instructions to engineering staff came from the signal box at New Kew Junction. For this reason it, for me at least, makes the history of the railway more 'real.' Yes I know that that is a vague statement, but when you are dealing with faceless names of managers, formalised processes and company hierarchy, to get an item that was used on the front line of railway work, and was the end product of all these things, humanises the work that I am doing. 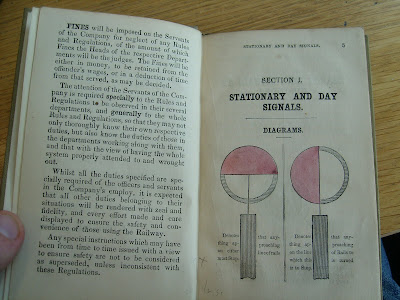 Secondly the rule books show how the company developed and what changed for railway workers through the ages. By default it also shows what stayed the same. The first rule book that I have images of, was issued to all staff in 1853. Boy were they obsessed with signalling! The first 10 pages are all related to the topic. Firstly the signals that they used back then weren't the ones that you have seen in Films and TV (or still, if you are lucky, on our railway network). They didn't have hands and were not controlled by a signal box. In addition the signals weren't tied in with the point changes, a mechanism that reduced the risk of crash. No, in 1853 the traveller was at the mercy of a guy standing next to a pole, at the top of which was a disk that had a light behind. To me that seems a little scary. Given that these individuals were essentially turning the pole to change the signal when the trains came past, based on their own judgement, it is not surprising that the rule book devoted a considerable amount of time to it...or so it seems.

In reality 10 pages is nothing. Technological advances, the increased complexity of operations and the emphasis on safety, meant that the 1912 rule book has a full 134 pages devoted to signalling and safe running. There are no discs here, everything on the L&SWR was pneumatic and subject to standard UK operating regulations that had been worked out through the Railway Clearing House. The changes in the rulebook tell me about the changes in the railway network and the stark changes in operational complexity. Therefore I think a survey of the rule books from start to finish would tell me a lot about the development of train control. This said there are those things that stay the same. I won't say much about the similarities, they're quite boring, however they cover the usual things like smartness, punctuality, drinking on the job etc. and reflect that some things stayed the same.

The last point is that rulebooks provide valuable sources of information about the nature of railway work, the management structure and the operational procedures. As an example I was uncertain about the early district management structure of the L&SWR, however the rule book from that year told me what I needed to know. Of course the later rule books, that were a standard nation-wide set of procedures worked out by the Railway Clearing House, have less information of an organisation nature than the earlier ones which are more company specific, but they still give good ideas about the rules under which railway workers operated. Therefore the rulebook has tremendous capacity to inform my work.

Therefore I think that the rulebook is a valuable resource for railway historians, that tell us about the life of railway workers, the organisation of the companies they worked in and complexities of company operations.
Posted by David Turner at 09:48