I have always been fascinated by the art of Britain's railways. Who hasn't been confronted by a 1930s railway poster and marvelled at the skill involved in producing these commercial tools. These weren't computer generated, one day productions, they were skilled pieces of work in which the railway companies, especially in the inter-war years, invested much time and effort. Indeed, a large part present society's memory of the inter-war railway network comes from these posters and the enduring images they created. When people refer to railway travel in the 30's they invoke memories of such great poster tag-lines as, 'Skegness is So Bracing,' 'Glorious Devon,' or 'Speed to the West.' This of course is a false image. Britain's railways in the inter-war years were run-down, stretched and suffering badly from competition with road traffic. However, this does show that the posters, to some extent, were successful in their aims. With other promotional tools they have helped shape our collective memory of Britain's inter-war railways.

Yet the 1930s railway poster is only one part of a continuum of commercial tools used by Britain's railways since their opening. The 120 or so railway companies that were in existence before 1922 all advertised their services from their openings. Thinking of my own railway of study, the London and South Western Railway (L&SWR) used text adverts in newspapers and pamphlets from its opening in 1838. It was only towards the end of the 19th Century that the company started to use posters and in 1914 set up its own 'advertising department.' Further t 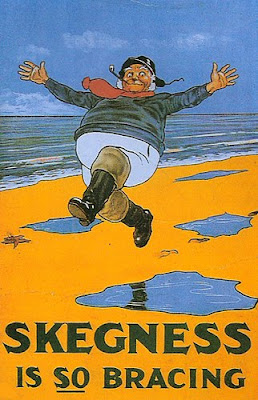 o look at the period after the Second World War, British Railways (BR) produced many iconic railway posters, particularly featuring the work of Terence Cuneo, as well as a mass of promotional material. Indeed up to the present day posters by the railway companies feature heavily at stations, although pamphlets beyond basic information as to the basic services are scarcer.

Therefore the history of railway advertising is an important part of the whole of railway history. Its study can tell us about how the railways wished themselves to be perceived and, by digging under the surface, inform the historian as to what their issues were at different points in history. It can also inform the historian as to what the expectations of the travelling public were with regard to rail travel.

Last Summer I was sitting outside Senate House, near Russell Square, waiting for a meeting with my supervisor, Professor Colin Divall. It was a sunny day, the leaves were green and the birds sung out their tunes. It was an unusual meeting given that I usually meet Colin in his office at the Institute of Transport History and Railway Studies in York. The Institute is a joint venture by the University of York and the National Railway Museum (NRM) and is quickly becoming Britain's centre for academic railway studies. However, the reason that I was able to meet Colin in London was that he had just come from a meeting with the funding board of the Arts and Humanities Research Council (AHRC). I have seen Colin smile a lot over the years, but never so broadly as on that day. He had just received funding for a project called 'The commercial cultures of Britain's railways 1872-1977,' to the tune of £300,752 (what the £752 is for is beyond me).

This is a very exciting long-term project to study advertising on the railways between 1872 and 1977. It will look at the role that the railways' commercial activities have had in shaping the populous' attitudes and expectations to railway travel and mobility, in the period. There will be extensive work on how and why the railways developed marketing through a wide range of media and moved from the older, text-based methods, to more pictorial ones. There will also be heavy emphasis on how the commercial culture that the railways fostered and developed fits into social, cultural and business history. The final outcome will be an exhibition at the the NRM. It will also inform future debate on whether in the age of global warming such commercial practices are sustainable as the railway industry faces capacity problems.

What interests me about this project is that it will uncover a hidden history of the railways and will broaden the knowledge of railway travel in a unique way. Very little academic study has been done on railway advertising and this will be an extra strand of information from which all railway historians can draw.

NOTE: Please be aware that my Blog posting may slow down for a while. I was knocked off my pedal bike on Tuesday and only have minimal use of my left hand so typing is a bit difficult at the moment.
Posted by David Turner at 11:50