The relationship between alcohol and travel is not one that I think anyone thinks about that much. I am, of course, talking about the attempts by the inebriated to negotiate the joy that is an integrated transport network after a night out and 6 beers down the hatch. I write with experience. On Wednesday night I made three of the most fatal errors the stumbling, bumbling, alcohol infused, London commuter can make. These were, firstly, walking around a large unfamiliar tube station for an unspecified time, then getting on the wrong train and, lastly, failing to check out with my Oyster card at my destination. Does the level of shame rank alongside whoofing down a whole chocolate orange when I got home...possibly. Actually why am I laying out the whole sorry story in my blog? I suppose to give the entry a point I'll end with some analytical observations, but I may just get there and give up, the shame bearing down on me like a massive cask of ale. Well, here goes. 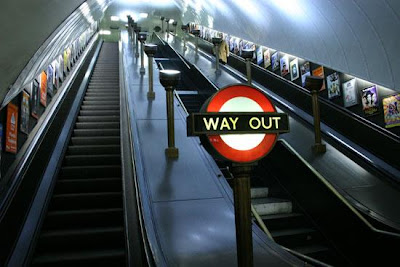 After a pleasant evening at my monthly Humanist meeting I left with a couple of friends and headed to King's Cross-St Pancras tube station to make my way home. On the journey we passed the Gothic St Pancras station. Alcohol always tends to make me more in awe of the building, I also could, if I didn't hold my tongue, talk about it for a couple of hours. So we passed with my usual thoughts swishing round my head, 'its a temple of railways,' 'a testament to the industrial age' and quickly followed by 'shut up David, no one cares,' and so we headed down to the tube station, went through the barriers and said our goodbyes. It was at this point that alcohol had its first joke of the evening with me, which a quick glance at the map would have remedied. My beer addled brain forgot that King's Cross is not on the same branch of the Northern line as Waterloo and I gleefully went down to the Northern Line station.

By this time, I think it was about 10.55, I could see that time was pressing as the Hampton Court train left Waterloo at 11.30. Now if I'm right I must have been wondering around the depths of King's Cross for about 10 minutes. I dunno really, time slowed down, sped up, came into existence and went out of it. I somehow found myself on the southbound Victoria Line platform which, ironically, was the correct one for getting to Vauxhall where I could also join the Hampton Court train. But alas I didn't take the opportunity handed to me by fate. So I followed the signs to the Northern Line and then, for some inexplicable reason (I'm going to venture it was a portal in the space-time continuum) I again found myself on the Victoria Line southbound platform. Fate struck again, I again spat in its face. I pootled off, right-royally confused, to find the Northern Line...again

I did this quickly. But in my joy I again failed to look at a map and got on the first Northern line southbound train at about 11.05. This, for a railway enthusiast and historian, was an inexcusable action. I was on the wrong train. When it comes to railways I should have no problem with getting on the right train, and in my inebriated state I can usually spout endlessly about the railways, describe locomotives and get home OK. This said, it was railway knowledge that saved me. Angel is the first station on the Bank branch of the Northern Line and as it was read out there was a a few moments of realisation that I had to sit through. “Am I...yes I...Oh Dear God!” Now my options were open. Either I could go back to King's Cross and chance it on the Victoria Line, or I get a connection to the other branch of the Northern Line and attempt to reach the train at Waterloo. At this point I would like to say that if TfL ever think of making a tube map which shows the journey times between stations, I'd support it. Now I am not saying I'd have been able to use it on Wednesday, given my state, but at least it might have helped a bit. Anyway. I took the former choice and managed to get to Vauxhall at 11.32.

I like to run. It is a past-time of mine. However that morning I had done a 2-hour one. Yes, I think I have the mind of a lunatic, but I like it. Anyway I figured at 11.32 that this would leave me between 1 and 2 minutes at Vuaxhall to get up the stairs, through the barriers, into the station and onto the train. Therefore I did my second run of the day, much against my will. I reached the train, panting and puffing, with literally seconds to spare. With all the failures of my journey home, you would think that this small success would allow me to be free of trouble for the rest of it. To my surprise the barriers at Vauxhall railway station were open, thus allowing me to reach the train in time. However, I'm a good commuter, and slapped my Oyster on the reader to 'touch in'. The problem was when I woke the next morning, with more than a slight headache, I remembered the alcohol had had one last victory. I had failed to touch out at Hampton Court, costing me a good £6.

So this is my tale of woe. Therefore I suggest that TfL, South West Trains and you, the reader, consider the following point. While TfL have banned alcohol on public transport, except when it is being carried inside someone, how much has it earned them through people getting on the wrong train and having to take other modes of transport home, or by individuals forgetting to touch out their Oyster and being charged the full fare? Surely TfL should quantify how much it may be earning them and encouraging alcohol consumption? Of course I say this with my tongue firmly in my cheek, but it is an interesting thought that in some way the alcohol industry is an indirect contributor to the public purse.
Posted by David Turner at 23:40