My PhD suffers from a few problems. Now, don't get me wrong, these problems are nothing to do with my choice of subject, the way go about it, or any decision that I have ever taken with regard to its course. Indeed, what it suffers from is the problem that afflicts most historians in some way. I, of course, refer to gaps in information. I have quite a few black holes in my research that test me and demand that I engage in creative thinking. No, that doesn't mean making stuff up, rather where those holes exist I have to propose the least worst answer to why event or decision 'X' happened and why it was so. I say 'least worst,' because any theorised answer will always be in some way imperfect, erroneous or problematic as the exact answer can never disclosed, unless someone finds a document in a draw. Of course my study isn't as troubled by such problems as other historical fields, such as ancient history, but because the organisation that I deal with was a business many were thrown out when deemed unnecessary.

For example, my father is sings in the Weybridge Male Voice Choir with the last yard-master of Feltham freight marshalling yard. The yard was opened by the London and South Western Railway in 1921. When in 1969 it closed down, he was told by his superiors to dispose of all the paper that had accumulated over the years. Seeing him recently was a sad experience for me. I asked him if he saw in this process any papers or documents with the words, 'London and South Western Railway' on the top. He said that most of what he burned were L&SWR documents. It is a sad shame that such things have happened, however it isn't a phenomenon unique to the L&SWR's documents. All companies have had large portions of their histories obscured because of the disposal of documents over the years. 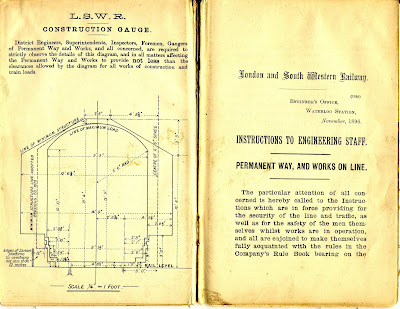 Indeed when looking at what is available at the archives only a fraction of the documents that were created by the railway companies are still available. At the most 'senior' level there are the Board and Committee minute books. However they only tell me what a decision was, not how they came about. I was lucky enough to stumble across the collection at the Hampshire Record Office, that does actually have minutes with correspondence attached that detail how decisions were taken. Below this most 'official' level of documentation there are just the financial records, staff records, random correspondence and odds and ends. There is far from enough to build up a full picture of railway operations.

Where therefore does this leave the historian? What are the questions that can't be answered accurately? Well I'm not really speaking about basic facts. We know when most lines were built, who managed the railways, what the locomotives types were, what colours of the trains were and how many spotters per square mile the country had in 1933 (OK the last one we don't know). What is missing is data pertaining to the important questions with regards to constructing an analytically detailed history of Britain's railways.

So I cannot really or accurately tell you how efficient the Victorian Railways were. For example I don't know how much it cost the railways in the 19th century to more one barrel of beer from point A to point B (factoring in all costs). We know that the railways kept information on the number of barrels sent from a station, the cost of running the trains, the cost of paying the staff and renewing the permanent way. Further we know that this data was collected centrally as the company did cite, very occasionally, how much each of these aspects of operation cost them overall. But alas, beyond company-wide statistics the majority of this information has been lost and so efficiency cannot be ascertained in a detailed manner (for example the cost of sending beer on one line, from one station or depot to another). Some individuals have proposed ways to find out this information. Econometricians attempt to calculate railway efficiency using maths, and come up with very interesting conclusions. I am however not convinced by these methods, and probably never will be until detailed costing results can be found.

Efficiency is one amongst a number of questions that cannot really be answered, and it is frustrating for railway historians when there are riddles begging to be solved, and no way of solving them. Or is there a way? In the four years I have been working on this PhD I have encountered, and indeed engaged with, the trade in railway documents. This has been from two sources. The first is ebay and the second was though ephemera fairs. I have to be honest I have stopped going to the latter because of the rather acerbic attitude of some of the sellers, so I consign my interest to ebay. What these endeavours have revealed to me is that there are vast numbers of documents in the hands of private collectors. I cannot quantify the potential rewards of this material to academics, but there is a problem with regard to getting access to this source of information.

Firstly a lot of enthusiasts are very possessive of the documents that they own, to the point where they do not allow others to see them. Recently a book was released on the L&SWR that was built on the fact that the enthusiast in question had inherited many documents from his father, who had worked at the Eastleigh works. I applied to the gentlemen in question to gain access, but to no avail. Indeed the in the course of writing the book the author received help from the South Western Circle, the group that studies all things L&SWR and who have always supported me in my work. In the final publication it seems that the author did not take heed of their suggestions. The individual in question, it seems, is only interested in publishing for his own self-aggrandisement. This is however not a unique case, and many of those who own documents perceive that those who wish to look at them will 'steal' the information. This is a sentiment I have encountered many times. Secondly, most of the documents are held by enthusiasts who are in their later years. If an individual passes, what is to say that those who will clear the house will have the same respect for the documents as the original owner. This puts a large number of documents at risk.

The second problem is that over the years some very special documents have come up on ebay. However with my limited funds I have been unable to purchase all, and thus have potentially missed out on very helpful information. This is more frustrating than being denied access to documents, because in these cases I did actually have a chance to get at them. Thirdly, and this is my particular bugbear, the continual dispersal, and re-dispersal of documents keeps the information separated making any access that is provided very hard work. Overall I am frustrated by the amount of information that may be sitting in draws, in shops and therefore is just going to waste.

Is there an answer? I don't have one. But as a community we need a more cogent response to document dispersal, preservation, and information exchange, that allows both enthusiasts and academics to build up a true picture of railway history. If we don't, it may soon be too late and we may loose a lot of valuable information. Answers on the back of an envelope please.