I wrote a few weeks back about how Dugald Drummond, (shown) Locomotive Superintendent of the London and South Western Railway, significantly hurt that company's finances through his independence from any form of control or oversight. Indeed when he got the job in 1893 he was reputedly given a 'very free hand' by the General Manager of the company Charles Scotter. This 'free hand' continued to work under Scotter's successor Charles Owens who took up the post in 1898. This allowed him to build what locomotives he liked, disrupt train services for his own personal journeys around the L&SWR network, and control investment policy in the department. This said when looking at the books on my shelf something strikes me.

I have many books on the L&SWR, some of them were written at the time and some of them shortly after the company expired in 1922. However, most have been written in the last 40 years and therefore are distant interpretations of parts or the whole of the company's story. An awful lot of them tell the story of the company's locomotive stock and on balance more is said about this topic than any other. I can understand why this occurs. Enthusiasts understandably have an almost romantic association with the locomotives of the railway. They were what made the railway run, they were its driving force. Yet I fear that this understandable love for the locomotive has a somewhat negative affect on the author's views of the people who orchestrated the building of them, the Locomotive Superintendents and Chief Mechanical Engineers of the companies.

In the third volum 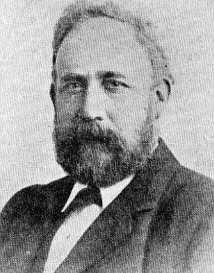 e of D.L. Bradley's series of books The Locomotives of the London and South Western Railway he covers the locomotives designed by Drummond. In his short biography of the Locomotive Superintendent at the start of the text he stated that:

'In recent years most South Western historians have mentioned Drummond's irascibility and fiery rhetoric, traits which were undoubtedly present, but these same writers failed to remark that they were reserved for those who failed to apply the company's safety code or display the high standard of diligence that Drummond demanded of himself and his employees of all grades. Those performing their duty had little to fear and much to gain. Drummond may not have been as well liked as William Adams [his predecessor], but he was equally respected.' (Bradley, 1986, p.3)

So Drummond was a little grumpy eh? The historians of the company generally have indeed criticised the man for being a bit of a live wire, a stickler for duty and somewhat unreasonable. Yet they do not necessarily see this as a wholly negative thing, looking on it as a bit of colour in the company's rich historical tapestry. Whereas the historians of the company's locomotives, and indeed Drummond's own biographer, have tried to defend the man from these not unreasonable criticisms on the grounds cited by Bradley. Even if he did have a temperamental personality, he was fair to the men and they respected him (even if they were nervous around him).

My concern is therefore this; that none of the histories of Drummond, his locomotives or the company even talk about the fact that he fundamentally failed to do his job as a senior manager within a business (for more detail on this please may I refer you to my Blog post of the 29th March). Now in real terms I really don't care about the financial health of businesses, being a bit of a leftie. But I do care about individuals writing good history. Therefore, if a true picture of Drummond is to be painted it does need to start from a different point than all previous studies of him.

Firstly we do not need the perspective of those who just study his locomotives. They invariably see the locomotive before they see the man, and they usually try and rescue Drummond from criticism. In their eyes he was wonderful by virtue of what he designed. Secondly, we do not need the view of those historians of the company, who see the railway company in a romantic light, before they see the man. They look on him as a highlight within the L&SWR

What is therefore required to assess the role of Drummond within the L&SWR? I believe that the best place to start would be a closer definition of what Drummond's role within the company was. Lets make this clear Drummond's role was not solely to design an orchestrate the building of Locomotives. It was also not to primarily manage the staff. These were only elements of his job. Drummond in reality was to:

Lets fact it, Drummond did none of these things the best he could and the company's finances suffered. Yet none of the written histories of the L&SWR, its locomotives or even Drummond's biographer acknowledge that principally he was a senior manager that failed in his duties. This is, however something I hope to rectify in my work. I will not fail to put in Drummond's colourful personality, it is an integral to the L&SWR's story, however most importantly I will tell a proper history of his place in the company.

In an interesting postscript, in January 1912 Herbert Ascombe Walker became General Manager to the L&SWR. He also was strong willed and a stickler for duty. While Chacksfield, Drummond's biographer, states that he was unsure what the two men made of each other (Chacksfield, 2005, p.113) I was given a clue through an article in the South Western Circular that was written by the son of Urie, Drummond's works manager and successor, in 1997. During the 1911-12 coal strike Walker ordered some American coal without telling or consulting Drummond. Angered by this Drummond had a bucket of the coal brought to Waterloo and emptied the contents over Walker's officer floor. (Urie, J.C. 'Tips for aspiring CME's' South Western Circular, Vol.10 No. 9, (January, 1997) pp.221), Clearly, Walker was tried to bring Drummond into line, to make him subservient to the needs of the company. This, therefore, I think was not unreasonable on Walker's part. Drummond died in November 1912 so the conflict never really materialised.
Posted by David Turner at 09:12