This week something shocking and unexpected occurred in the rail industry. After three years in the job, Iain Coucher, (shown) the Chief Executive of Network Rail (NR), who own and maintain Britain's rail network on the taxpayer's dime, stepped down. He won't be going immediately. He'll stay in place to help choose his successor. Now of course everyone had differing opinions on Coucher and his legacy.

Bob Crow of the RMT predictably stated that this was an exceedingly good thing. “As far as we are concerned it's good riddance to Iain Coucher,” said Crow, "He has presided over a culture at Network Rail that has attacked jobs, working conditions and rail safety while his salary and perks have gone through the roof." On the other side of the fence was Anthony Smith, the head of Passenger Focus, who praised what Mr Coucher's had done for the humble passenger, "Britain's rail passengers will thank Iain Coucher for what he has achieved at Network Rail. His relentless attention to getting more trains on time... has helped underpin the gradual rise in rail passenger satisfaction over the last few years." This was reiterated by a number of voices in the industry such as, Bill Emery, the head of the Office of Rail Regulation (ORR), who regulate NR, who said that Coucher had "major contribution to our improving mainline railway.” 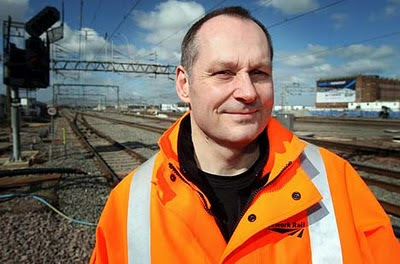 With the first two individuals it is easy to understand why they made their comments. Bob Crow quite understandably attacked those aspects of Coucher's leadership that he perceived as affecting his union members' interests. Coucher clearly was on a weighty pay packet. Even though he waived his £150,000 bonus last year, he still received from a 'management incentive scheme' £150,000 on top of his £600,000 per year salary. This, so I am told by the papers, is four times the Prime Minister's pay packet. Therefore, while jobs amongst NR 35,000 workers are on the line, NR had Britain's highest paid public 'servant.' Indeed, Coucher was reported in The Times as having said that he would, '...refuse to take a pay cut and that he is worth every penny of his £613,000 salary.” This arrogant attitude betrays in part the culture within NR's higher echelons and even though Coucher waved his bonus last year, his management team did not. Crow's other comment does, sadly, hit the nail as three NR workers died this year. Indeed, the ORR did issue five prohibition notices and 21 improvements notices about safety. As such, as Ian Prosser, the ORR's safety director, said no one in NR's management should receive a bonus. Therefore, Bob, for once we are in agreement, this man did get paid far too much.

On the other side of the fence there is Passenger Focus. OK, this is QUANGO. Basically their role is to stick up for you, me and us, as passengers. They are always the ones that come out and complain about fare rises, they also measure passenger satisfaction. You see, they are one of last government's favourite kinds of QUANGO. It looks good, but is utterly useless. Anyhow, they are happy because Iain has made the passengers happy – simple.

It was Bill Emery's comment that was the most interesting as Iain, I'm sure, doesn't like Bill. On the 30th April Bill wrote a nice letter to NR regarding the performance of the company this year. He described NR's year as 'mixed'. He was complementary about passenger safety and the performance of the railways generally. Basically, because of NR ,as a passenger you are safe and on time. But, Bill also stated that the ORR was still concerned with the “Lack of progress with some regulated performance requirements, your asset management competence and the weakness in timetable planning, all set in the context of there being three worker and contractor fatalities during the year.” Overall he said that, “we are disappointed that it has too often been the case that...you only make progress when we press you to do so.” Shocking really isn't it. Under Coucher NR isn't really doing its job, and as such the ORR needs to occasionally take out the poker to do make it operate effectively. This, therefore, is a problem that can only be laid at his door.

Then the next thing happened after this damning letter, was that NR published its accounts on the very next day...oh dear. Coucher revealed that revenue was down from 6.16 million to 5.69, principally due to the ORR cutting rail and freight operator's track access charges so as to force NR to make efficiencies. In addition the ORR reported that NR overspent by £149 million or 17% of its budget. As such the report showed that, NR spends too much and is receiving less money from the train operators. On top of this, with the financial crisis about to hit it hard, NR will be receiving less money from central government. This therefore a worrying time for NR, but more so for us as we fund it.

The problem with the mass-media coverage of the entire NR/Coucher resignation story is that very few sources focussed on the crux of the issue. Very sad as they were, the three worker deaths should not have been the main talking points. Indeed, their mention was usually tagged onto mention of Bob Crow's comments about safety. Further to this, every newspaper, website or journal focussed on the bonuses far too much and in a sensationalist manner. This is because we are in an age when the bonus as a concept in business is being attacked. While it is important to scrutinise bonuses, they are in reality a drop in the ocean, in NR's monetary terms and should not have received that much coverage. In my opinion, there was one gaping hole in the coverage of the story.

The coverage failed to talk about what happened to NR's finances and management under Coucher's leadership, which in my opinion was the most important issue as we pay for it. Therefore, very little commentary stated that NR uses money like liquid gold, a symptom of its corporate governance being, as described in the comments by the ORR, shockingly bad. Firstly, a recent regulatory review found that in comparison with European railways, NR is between 30 and 50 percent less efficient in spending on maintenance and track renewal. Bill Emery has said that “it's very clear that the railway industry [in Britain] does not stand good scrutiny with its peers on costs.” NR did claim that under a new 5 year cost reduction plan they were reduced by 7%, or 86 million, in 2009-10. However, this isn't reality and all that happened was that a number of projects were postponed meaning that infrastructure projects will just build up in a back-log.

Further, by NR's own measures, it stated that it had improved efficiency by 4.9%. However, this was instantly and comprehensively dismissed by the ORR, who said that in reality efficiency had 'gone backwards' in both operational efficiency and maintenance terms by 2.5%. Indeed, if things keep going like this the ORR has said that NR's debts would bankrupt the industry (yes you heard me, that's Britain's entire industry) by 2020. Its debts stand at the moment at 23.8 billion, and hence why I said that bonuses, while important to look at, are a drop in the ocean. Overall, NR's corporate governance is clearly in a mess and costing the taxpayer dearly. Therefore, the blame can only be laid at Coucher's door.

With mounting pressure and scrutiny, I therefore feel that Coucher's resignation shouldn't have been that surprising. But, I ain't complaining. I think it is good that Coucher has gone because at the end of the day, while he has been at the company since it was formed in 2002, he has overseen a period when NR's spending was unacceptably high by every measure concocted. The problem with Coucher's appointment three years ago was that he was simply promoted from being deputy Chief Executive, and subsequently didn't bring new ideas or a fresh pair of eyes to the job. Thus, he clearly allowed the continuation of inefficient working practices, mismanagement and cost inefficiencies that had been developed in the five years before hand under his predecessor John Armitt. Crucially, he didn't make the changes necessary to improve NR's corporate governance, and was, therefore, clearly the wrong man for the job. In the era of fiscal responsibility, what is needed at NR now is a new Chief Executive that is, a) not appointed by anyone in NR, b) has the ability and the knowledge to assess NR's costs and make efficiency improvements, and c) has the strength to sake the management of the company out of its complacency. These qualities are vital so that the taxpayer's money isn't wasted.