So this has been a tough week for me...I'm starting to worry about the new transport secretary. I wrote a few weeks back about how traditionally Conservative governments haven't ordinarily been the best for the railways in terms of investment, attitude and simply being logical about policy. It is quickly starting to seem that Philip Hammond, the new Secretary of State, simply isn't the best for the Department of Transport (DfT). This isn't a matter of cuts, we know that they'll happen. Indeed, under the new regime, nearly £700 million has already been cut from the DfT's budget, including £100 million from the profligate Network Rail, £108 million from Transport for London, £309 from grants to local transport authorities for investment and the £50 million 'Better Rail Stations' scheme has been scrapped. This said, certain things such as Crossrail, the new High Speed line and, much to my astonishment, the electrification scheme, have all been guaranteed and the government's commitment is secure. 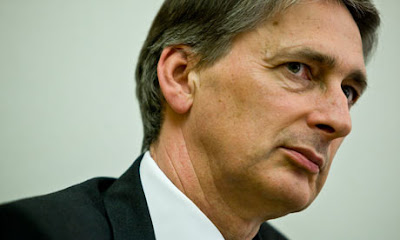 No, my concern is that Hammond is a man who is unsuitable for the Department for Transport. This is especially pertinent as there are so many other individuals that, in my opinion, would have been better in that post. Lets look at Hammond's résumé. Now being Secretary of State for Transport you'd expect to find some background knowledge of transport matters apart from the fact he pootles around in his car. Yea, I couldn't find anything, not one jot, apart from his intimate knowledge of his Jaguar XJ. Hammond was elected as MP for Runymead and Weybridge in 1997, and before then had a business career in property, manufacturing, consultancy and oil and gas. He also had a position of the board of the property developers, the Castlemead Group, and has had various consulting jobs, most notably for the Malawian Government and the World Bank. As such he apparently still holds onto many business interests, having a small fortune of a 9 million pounds according to the New Statesman.

So let me get this straight, this man has not had a career anywhere near transport, that's of course beyond flying to Malawi and driving. OK, well surely in opposition he was shadow Transport Secretary and has learnt about Transport issues? No, wait, that was Theresa Villers. Hammond was Shadow Secretary to the Treasury. Therefore my conclusion is that Hammond doesn't know about transport beyond his own experiences of it. Instead, he knows about money. I appreciate that money is a big issue at the moment, and we need someone that is savvy about such things, but on the flip side we also need someone who knows about transport, not just from their subjective perspective. But hey, the last holder of the post, Lord Adonis, wasn't that aware of transport issues before he started, beyond being very interested in them and, I suspect, being a railway enthusiast. But he learnt on the job, listened to experts, read all the documents. Therefore, while I genuinely feel that government posts should always be given to people who actually know about the department they are working in (George Osborne...really?), if we have to have have Secretary of States with no background pertinent to the job of the department, then they should take time to understand everything they can about it.

In this vein I'd expect Hammond at this stage to be making measured and constructive comments...right?...sorry, wrong again. Hammond has already deferred to his own subjective opinion when opening his mouth. Firstly, as I pointed out recently, Hammond believes that under Labour there was a 'War on motorists,' something he announced on his first full day in the job. Where? Do you hear the guns? Or perhaps the distressed motorist yearning for the battle to be over. Lets get this straight, the 'war' never existed. Its in his head. But then again, he is a motorist! What's more he has already talked, in an interview with the Evening Standard about his attitude towards cyclists, a number in which I count myself.

Now, just to put this on record, I believe that a lot of cyclists are idiots, who are reckless to the point of insanity. But I was knocked off my bike about a month ago, even though I had right of way, good lights and was being cautious. The moral is that even we cyclists who obey the rules of the road are just as much at mercy from bad driving, as drivers are from reckless cyclists. Therefore imagine my consternation when Hammond in an Evening Standard interview stated that, “Cyclists need to be more aware of the risks around them. It frightens me to death when I see them pull out around other cyclists, completely unaware there is a car behind. Maybe they need wing mirrors.” So it is completely the fault of the cyclist is it Mr Hammond? That's what he seems to be saying. While many cyclists clearly do need to be more aware of what is happening around them, I think that so do many more drivers. This isn't a one way street, everyone on the road needs to address why hundreds of people get killed and injured on them every week. Hammond, is clearly is deferring to his subjective view for his opinion.

But can it get worse....? You bet. Apparently the man cares about the environment. In the Evening Standard interview, he clearly had no views about the environmental aspect of public transport, barely mentioning them. His only viewpoint was that when he brought his new Jaguar XJ it was the 'greenest in its class.' This again highlights that Hammond is a car-lover and even though he denied being a 'petrol head' it strikes me that all the evidence points to the fact he is. He did, however, state as a convenient caveat that he doesn't like Top Gear. There is no logic in this statement. I didn't like Michael Portilo's recent BBC series, Great British Railway Journeys, where trekked round the country rail. So, by that logic, I must hate railways. Wrong...I love railways, I can't get enough of them.

It strikes me that Hammond is quite clearly a fan of the roads who hasn't the experience to deal with public transport. But, being a man who knows about business and money, he will know about sweating assets and earning revenue. These things, of course, will need to be done, but I suspect, however, he will have a detrimental, motorist-centric, view of transport policy. I really do hope that he does become more friendly towards every other form of transport, other than the car, but I don't hold out much hope. In short, we need better than this...Hammond isn't good enough.

If you want to read the Evening Standard interview with Philip Hammond, it can be found HERE