Last night I gave a paper at the London School of Economics on the development of the London and South Western Railway's management structure between 1836 and 1881. Of course, after such an event, there were a number of questions that were posed regarding the paper. These continued at the pub, the natural home it seems of the business historian. Of course, many subjects flew around, but one of the most interesting was the idea that railway engineers, especially in the early days of operation and construction, formed a 'who-knows-who' network that placed their students in important managerial positions in the emergent industry. This was because we knew that such railway luminaries such as Isambard Kingdom Brunel and Joseph Locke, both railway engineers with great influence in companies, placed their men in senior positions in railways they built.

Indeed, Locke, who built the London and South Western Railway is a particularly good example to show you what I mean. Locke had a reputation for having unbounded energy. He apparently moved so fast that his assistants found it difficult to keep up with the man. It is these assistants that are of interest. Indeed, perhaps Locke moved so fast that the assistants were simply left behind on the railways that he had built. 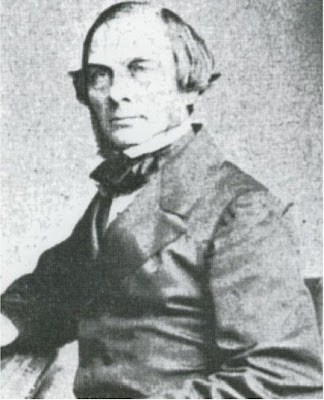 The number of the South Western's early managers that were Locke employees at some point meant that Locke had a heavy influence on the early management of the company. Both the first and second Locomotive Superintendents, Joseph Woods and John Viret Gooch (shown), had been employed by Locke. We only know that Woods was an employee of Locke's however more information is available about Gooch. He had aided his master on the construction of the Grand Junction Railway and in 1837 became its Resident Engineer. Gooch also had a link to another railway notable, in that his brother, Daniel Gooch, was the Great Western Railway's Chief Mechanical Engineer from 1837 to 1864. But it didn't stop there. One of Woods' first assistants was Joseph Beattie, who had charge of all the wagons and carriages on the line from 1839. He also had been a pupil of Locke's, also serving on the construction of the Grand Junction Railway and on the South Western.

However Locke's influence could not just be found in the Locomotive department. In 1836 he had became the company's consulting engineer. On resigning this post in 1849 he left in his place John Edward Errington. He also had aided Locke on the construction of the Grand Junction Railway, and had cooperated with him on the Lancaster and Carlisle Railway and thus had been in his employ for some time.

The moral of the story is that Locke was simply dropping engineers the South Western regularly to manage aspects of the company. Indeed, it also seems he did the same on the Grand Junction, which makes me think just who did he leave there? Of course I am only aware of the staff he got appointed on these two railways, but it is quite possible that on his other projects he did the same. Further, it would be fascinating to know which other engineers, such as Brunel or Stephenson perhaps, also left staff on railway companies. Indeed the South Western's Resident Engineer from 1870 was William Jacomb, a student of Brunel's who had been appointed from the Great Western Railway...however being dead since 1859, I doubt that the great man had anything to do with this appointment. Although, come to think of it I think that one of the directors of the South Western was a spiritualist...so, you never know. But, the fact was that Jacomb had been left on the Great Western when Brunel had died. He like Woods, Gooch, Beattie and Galbraith was simply left there. The main point is that early railway managers, particularly the engineers, seem to have had a significant influence on who was a railway manager in the companies' early years.

But why did these networks operate so fervently in the early railway? While the senior engineers are better known for building railways, in reality a lot of their work involved organising them as well. Indeed, many early railways, including the South Western and Great Western, were dominated by engineers. Locke even wrestled control of the L&SWR, for a short time, from the Directors of the company. They had this influence because, in reality, railway managers in the true sense of the word, those who had their entire careers in the industry, didn't exist in the 1830s and 40s. Going back through my blogs you will find a piece that I wrote describing how early railway managers were from a range of industries, that had some loose association with what the companies were doing, i.e. moving traffic and engineering. You can find it Here. This, therefore, provides a possibility as to why exactly senior railway engineers placed their men in the new companies...there was possibly very few people who could undertake managerial responsibilities, and being in such a position of control these engineers simply put forward their own men.

Therefore it seems an interesting future research agenda is to assess what the influence of these networks had on shaping how Britain's railways came to be managed. Given the importance of management structure to company efficiency, operation procedures and profitability, could it be possible that the actions of only a few individuals in the early history of Britain's railways, came to shape their course over the next 180 years. Well this is an open ended question that at some point I hope to answer.
Posted by David Turner at 22:41