The new Secretary of State for Transport, Philip Hammond, is still a worrying figure. I never know what he is going to do next. Last week he announced that the last government's train carriage procurement programme would undergo an “urgent reappraisal.” This programme was put in place by Labour in March 2007 to build for Britain's railway network 1,300 brand-spanking, shiny new carriages by March 2014. By March this year 526 had been delivered with around a 100 more on order. The carriages were introduced to ease the capacity problems that have the potential to make everyone feel like a sardine in the near future, as it was estimated that by March 2014 there would be a 17 per cent (64,900) increase in peak commuter traffic into London, and a 27 per cent rise (17,400) in the numbers of people travelling into other cities.

With the economic crisis in full swing, it was unlikely that these sorts of projects would be immune from cuts. Lets face it, while capacity is a severe problem between 8 and 9 am, when there is on weekdays half the day's inward London commuter traffic, capacity is not a problem at other times. Therefore, the rational for vast expenditure on just one hour of traffic is not as great as safety equipment, new lines or maintenance. After all, people can just travel earlier if they don't like it. That is, at least, what some people think.

The backdrop for the “urgent reappraisal” of the project was the National Audit Office's (NAO) report on the government's plans to address the potential capacity problems. Now the report, which has been framed by almost every news outlets as being a 'hammer-blow' to the project and a shocking indictment of profligate Labour spending, was quite measured in looking at the programme from a viewpoint in a changed economic environment. If people had bothered to read it (well I've read the summary) they would have realised this.

It stated a number of things that perhaps we should have really expected with an economic downturn. Firstly the growth in commuter passengers is unlikely to materialise as predicted. We're not, however, talking a 20% drop, not even 10%, but only a meagre 5%, and even that is a bit pie-in-the-sky as the report suggests that “There are some signs that the recession has indeed reduced the use of rail but the extent of the impact is not yet clear.” Secondly, the report stated that the cost of building the new carriages has gone up since 2007, which means that the Department for Transport would either have to incur more cost to fund the same number of carriages, or keep spending at the same level and purchase fewer carriages. This was, quite naturally, a good chance for the Daily Mail to attack Labour by accusing it of wasteful spending. 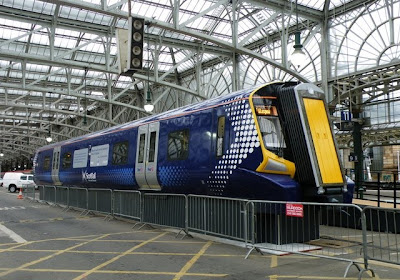 But in reality the report was a mixed one for the former government. It criticises the model that they used for predicting passenger rises, stating that the sample of information used was not large enough. The predictions also did not take into account the relationship between economic growth and passenger numbers, and made assumptions that simplified the realities of the real world so that result could be obtained. Thus these factors may have distorted the predictions. But let us not get totally disheartened. Overall the report stated that the forecasting was 'robust' and was based on a 'good knowledge of the railway network.' Indeed, it also states that the real world assumptions were inevitable given that it is incredibly difficult to predict some passenger behaviour, for example when a passenger changes off their 'preferred' train because they don't want to be on a crowded one. Further, it also stated that the models used for economic growth were 'in line with treasury guidance,' and on this count the DfT cannot be blamed as they wouldn't really go elsewhere for this information now would they? Therefore, there may be some room for justifiable criticism of the forecasts, but in reality I will give the Labour DfT 6/10, as some things were done right.

Indeed, Philip Hammond saying that the former government was profligate with money actually contradicts the report. It states that the Department, 'is assessing each scheme again for value for money before approving them.' While on a cursory reading this may seem that these assessments were introduced by the current government, the NAO was actually compiling information for the report between July and October 2009. It was, therefore, the previous government that was assessing each project's value for money, and for Hammond to make this claim when the initial rational for the procurement project was sound and the change in economic environment was unknown in 2007, is verging on ridiculous. Let us not forget, it was they who actually commissioned the report, and there is nothing to say that they wouldn't have decided to put the new carriages on hold as well. Hammond is therefore just using the report to bash the previous government. While that is something I am never afraid of doing, I won't do it unfairly.

In truth, I think it is sensible in the short-term for the government to reassess the building of new carriages, especially as the cost is now higher than it was before. What has really got me worried, what has really made me stir, is Hammond. I suspect this will be used by him as the basis to rule out, for the term of this government, any new carriage procurement or capacity-increasing measures. It will mean that as the passenger traffic continues to grow (and remember they can't prove yet that there has been any drop in numbers) the government will simply allow passenger trains to become more crowded. I can't prove for sure that this is Hammond's long-term thinking, but it wouldn't surprise me given the evidence that I will now present proving his pro-road, anti-rail perspective.

Now I have banged on about Hammond's suspected pro-road attitude before in the blog, citing comments he has made that I think allude to it. Yet I (and the rest of the media apparently) have found nothing concrete, nothing solid, that confirms all the fears of those in the railway industry or in the press that he holds these views. Hammond, as the head of the Department of Transport, isn't exactly going to state that he prefers one form of travel over another is he (and congratulations to Norman Baker, Minister of State for Transport for dodging the question on the Daily Politics Show earlier). To come out explicitly favouring one sort of transport when he hasn't been long in the job would be lunacy.

So I did a bit of digging on a wonderful site called 'They Work For You', looking for any comments that Hammond has made on his possible love of cars as opposed to railways. I did not expect to find the evidence that follows. This evidence conclusively proves what I have come to suspect in the last few months. In a debate in Parliament on regional policy in January 2003 Hammond made this comment:-

“Although everyone would like railways and airports in their regions that will help to generate economic development, such transport investments depend on volume and critical mass to deliver effective services. I am afraid to say—because it flies in the face of much Government thinking—that only roads, as a form of transport infrastructure, are likely to deliver the short-term immediate benefits to the regions where economic development needs kick-starting.”

How about this this one from a debate in November of 2003 on the Quality of Life, when he said:-

“If those people go by train, they will have plenty of time to ponder on the longer journey times and decreased reliability of a railway that is soaking up ever-larger volumes of taxpayer's money. And they will perhaps have a chance to consider the Government's extraordinary feat in turning a poorly performing element of our infrastructure—our national railway—into a worse performing one, which now seems to need to double as a bottomless pit for public finance, if we are to avoid its imploding completely. If they go by car, they will be able to contemplate the £45 billion in taxes that Government impose on motorists, while considering that Britain's spends the lowest proportion of motoring taxes on transport of any country in the western world.”

His last comment is from the Finance Bill, debated in June 2008, in which he uses a 'road' example and breezes over rail investment as being good for business:-

“One can envisage such situations with railway or new road infrastructure, if we are trying to encourage private companies, as the Government have done with the M6 toll motorway for investment in road infrastructure. Similar considerations would apply—very long payback periods for very durable pieces of investment.”

I will let you read what you will into these comments individually. However, joining the dots between them, which are all clearly on the pro-car side of the fence, and his more recent statements that I have detailed in a previous blog entry, (To be found HERE) the evidence suggests that we have a Secretary of State for transport that is very anti-railways and very pro-roads. Therefore, having Hammond as Transport Secretary may potentially mean that rail investment as a whole will suffer, while the car reigns supreme. I feel I need to be dipped in Oil, it's Sardine time!

There are now multiple ways to connect with Turnip Rail: