What will happen on the railways in the next 5 years...some musings

Ah, so all the budgets of all government departments are going to be cut by 25%. Well, all the budgets except the ministry of health and international development. This is therefore going to be a scary time for the railway industry, especially as they take up the majority of the Department for Transport's (DfT) expenditure. I honestly, do not think that any idea, project or whim will escape the axeman's wrath. Nor do I think that the existing rail network will be immune. In short, start screaming now. I will now attempt to rationalise what is going to happen, or at least may happen.

1.Firstly, those projects which have already been stopped won't have any chance of being restarted soon. Even under the previous Labour Government some things had been kicked out of the park. For example, the Intercity Express Project, that was designed to replace Britain's ageing HSTs and Intercity 225s, was put on hold by Lord Adonis. But the new Government has already cut schemes such as Network Rail's 'Better Stations Project' that was going to improve some of Britain's most passenger-unfriendly stations. Lastly, as I discussed in an earlier Blog post, over 700 new carriages are not going to appear. The overall theme therefore is that comfort on rail journeys is not an important thing in the new era of fiscal tightening. You are going to be squeezed, pushed and jostled on your journey. In a way I don't mind so much, I have to say I expected this. Is comfort really the most necessary thing when everyone in the country is having to pitch in to reclaim the debt? In truth, I don't thinks so, but I just really wish it wasn't happening. 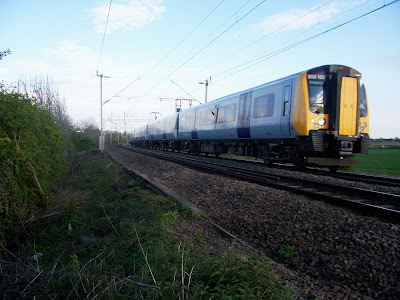 2.The raising of fares will also be on the agenda...naturally. While I think a lot of people will jump to blame the new government, but then I'm not unfair. I should point out that increasing the price of tickets actually was on the cards under Labour. They wanted to reduce the amount of money that they paid to the Train Operating Companies (TOC), who in turn would have to put up the train fares to make up the funding shortfall. My only concern now is that with the DfT turning increasingly pro-road under Philip Hammond, they will allow a much more fervent rise in fares that may price people out of rail travel even further. This, however, in a way makes sense, especially given what I said above. If there is less space on the trains, a few less passengers would probably make my journey less stressful. This said, I'm not happy about it. Nothing should ever be done to discourage the public to use the trains.

3.So what of the big capital projects. Well, of course there is Britain's second High Speed Line (HS2), which was to link London with Birmingham, Manchester and Leeds through new whizzy trains. I have to be honest, I don't think this'll happen. Firstly, it's just WAY WAY WAY too expensive. Simple. But more to the point, with the cost being roughly £34 billion, and with a 25% cut in the amount of money available to the DfT, I am convinced that that the cash will be needed to maintain the existing network. Further, when I think of the way that the project was talked about before the election, in that the issue was sustained by the fact that no party wanted to pull their support for it, I think that the government will realise that that it was a political marketing stunt and as such it will loose its importance. With the new coalition, I suspect, it will get quietly dropped. On top of this, I suspect that the electrification of the Great Western Main Line will be dropped...again quietly. All in all I feel the message for the railway industry in the next 5 years will be to make the best out of the country's existing infrastructure.

4.Lastly, I think that the government will be much more cautious about renewing franchise agreements. On the 18th June the DfT put all franchise renewals on hold and extended the length of time that the East Coast franchise would remain in public hands. Some part of me thinks that this move is a precedent and that the DfT has seen that renationalising franchises by stealth is the cheaper option. My hope is that over the next 20 years privatisation will fizzle out. Yea, this is whimsy. There's no chance. I just think they will take more time to formulate what they want from the franchise agreements, and then make them longer. This hasn't really been a bad thing, the Chiltern franchise, that is 20 years in duration, has been one of the consistently the best performing. Thus, I think that longer franchise agreements may actually be good for the traveller and will deliver better services. However, it may also mean that the DfT restricts the amount of money they put into the franchises and force the TOCs to put up fares and reduce the quality of the travelling experience. I think in the new anti-rail era, the latter is more likley.

For all my speculation what will actually happen is a mystery. However, if the railways are going to be cut in such a horrific way one thing does need to happen that I don't think has happened in a long time. The government, DfT and all involved need to ask themselves one crucial question...what do we want our railways to do? Yes...we need a strategy. At the moment they are simply being looked on as an expense, a position that I think that will become more prevalent under the Conservative government. The railways to state their purpose, to define their role within the nation, within the economy and within the public's lives. If we know what the railways are for, if we have a clear-sighted goal, then all those involved can work towards making it (whatever it is) a reality. At the moment the TOC's, NR, the DfT, simply do their job without any purpose. They spend their time fighting, maintaining the status quo and not really affecting real change. What we need is a concerted effort to make Britain's railways the best they can be, for everyone who lives here so that we can survive the cuts to come.
Posted by David Turner at 17:35