In the recent few days I have been thinking about the idea of control of policy with the London and South Western Railway (L&SWR). On Tuesday I will be presenting a paper at a magnificent place, the Institute of Historical Research's Postgraduate Group's, Summer Conference. The theme of the conference is politics, and hence why I have opted for a paper on policy control within the L&SWR. While not an traditional political topic, the study of internal organisational politics has many commonalities with the study of government departments interact. For example, these common themes include the control of the organisation, conflict for resources between stakeholders, such as department heads, and the complex range of issues that surround principals (voters/stakeholders) and agents (Government/Directors or managers). Therefore, this is why, as a business (or railway) historian, I get into the conference. I am trading similar ground as those political historians.

My paper surrounds the process of moving the L&SWR's Locomotive, Wagon and Carriage Works at Nine Elms (near Battersea) to Eastleigh. This happened in stages between 1891 and 1909, however the process of took a long time, with considerations for moving the Nine Elms works 'into the country' being found in unofficial capacities in the 1840s. The first official mention at committee level came in 1860. I won't want to give the game away regarding my entire paper, especially as some of the people who hear it may read this Blog (I mean you Simon and Peter). But I would like to focus on one event that will be covered in the talk regarding the power of a department head to completely stop a major policy proposal in its tracks.

By the 1880s railway companies were the biggest organisations within Britain. They had developed managerial hierarchies that, while highly populated with managers and supervisors, were relatively easy to understand. All business historians will agree that most British railway companies by the late 19th century had developed the 'Functional Department Structure,' in which each department controlled a different function of company operations. Therefore, the three main departments within most railway companies were 'Traffic,' administering the transit of goods and passengers along the line, 'Locomotive,' maintaining and building the rolling stock and 'Engineering,' maintaining and constructing all the infrastructure. These were supplemented by a range of other departments such as Audit, Accounts, Docks (if the company owned any) and Stores. I take it that you have got the theme now, so I won't need to explain what these departments did.

The problem with this structure was that as the departments became larger over time, they separated from each other within the company. Therefore, these departments became institutions in their own right, giving the department heads control over ever-expanding multi-layered and complex dominions. Subsequently, departments separated organisationally, allowing the heads to run them as they wished. But this, in many cases meant that they prioritised operational effectiveness, over economic responsibility, allowing them to loose sight of the overall revenue position of the company (see an earlier post on Dugald Drummond, Locomotive Superintendent of the L&SWR for an example.)

This problem was also exacerbated by level of oversight that department heads received. Directors on the sub-co committees of the board, each of which covered different areas of operation (such as the Traffic Committee, Locomotive Committee etc.) had to meet with the different heads of department, to ratify or deny his proposals. However, the Committees only met twice a month and therefore could not possibly have hoped to obtained full knowledge of the departments that they were discussing and this made them reliant on information provided by the department head. Thus, the department heads could decide what information to provide or deny the committee, allowing them to shape company policy towards their own desires.

It is this relationship, between manager and committee, that forms the crux of my post. Nine Elms, had been the home of the London and South Western railway since its opening in 1838. However, by 1882 the site was getting cramped because of the increased traffic and operations of the company. Originally the site on the north side of the line housed the passenger and goods terminals, as well as the Locomotive, Carriage and Wagon works. As traffic grew, and the scale of all these functions increased, the company required more and more room to accommodate them. This was partially alleviated in 1848 when the company's London terminus moved to Waterloo. Further, in 1860 it was decided to move the works to the south side of the main line and convert the entire site on the north into goods facilities. However, by the 1880s, the northern site was again coming under the pressure of traffic and more space was needed. Further, the Locomotive, Carriage and Wagon works were also suffering due to lack of space. 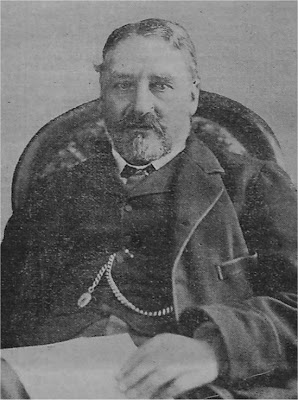 The company sprang into action and the Engineering Committee, which had responsibility for rolling stock affairs at that point, asked the opinions of the General Manager, Archibald Scott, and the Locomotive Superintendent, William Adams (Shown). But, there would be a disagreement over what was to be done as the directors and Scott wanted to take one course of action, whereas Adams wanted to take another. The directors and Scott both wished for the locomotive works to be moved into the 'country,' wherever that may be, so the Traffic Department could occupy the space on the south side of the line. Both parties also recognised that this would mean a 'new start' for the Locomotive, Carriage and Wagon Works as the new facilities could be built in a more efficient manner. The previous works buildings had been built-up in an ad hoc fashion when required. This had made them inefficient for operations.

Once decided on a course of action Scott and the directors referred the matter to Adams for his take on the situation. Adams comprehensively rejected their idea to move the works into the country. In a letter to the Engineering Committee of the 12th September 1882, he laid out 11 reasons why he did not advise the move. He had put up fierce resistance, and in consultation with the General Manager the directors subsequently dropped the plan. However, I believe that Adam's rejection of the idea had little to do with the reality of the company's situation. Rather, I feel that all he wished to do was protect his own power and control over the works. At the time the letter was sent I have identified a number of reasons for this.

Firstly, Adams did not put forward anything positive within the report for the move. Indeed, all the 11 points are negative. This, to me, has always seemed illogical. He did not mention that a new set of buildings could be built 'fit for purpose,' possibly saving the company money in terms of staffing, engineering considerations, or time in the production and maintenance of rolling stock. Secondly, in 1881 Scott as General Manager had been given more general control of the company. He had held the post since 1870, however up until that point he still had control of the Traffic Department. However, with the increasing business of the L&SWR, in 1881 it was deemed that he should have more time to coordinate the departments better. As a result he lost immediate control of the Traffic Department and was given more general control of the company. It is, therefore, quite possible that Adams felt that his own power was under threat because of the change, as Scott's interference in Locomotive matters was now greater. Lastly, as Adams noted in his letter, the buildings would be built away from the Locomotive Department headquarters at Nine Elms and would require a separate superintendent of high standing to administer them. This would mean that Adams' control of the works would be devolved to a new manager, from whom he would be geographically separated . This too would diminish his power.

My suspicion that Adams objected to the move to retain his power, is confirmed by events that happened shortly after. After the plan to move the works was rejected, Scott complained to the Engineering Committee that he felt that the work of Carriage Department was 'not sufficiently attended to' and that because of inappropriate inspections carriages had run in a poor state. He had been alerted to this fact when one had been complained about. His suggestion was that Mr Adams be given assistance in the carriage department at Nine Elms by an independent carriage supervisor. Adams did not like this idea and suggested that the best way to solve the problem was to extend the repair shops to accommodate 50 more extra carriages and rearrange the existing staff more advantageously. In his opinion, the General Manager's suggestion should be acted on only if his proposed rearrangement did not work out.

Adams' reactions to the two proposals described show his reluctance to loose any power within the department. In the first, he implied that a separate carriage and wagon construction facility would require a separate superintendent and this was a negative thing. Then, shortly after, he also stated that at Nine Elms there was no need for any assistance. Clearly, Adams disregarded doing what was best to resolve the L&SWR's operational problems in favour of satisfying his own concerns.

The truth was, however, as head of the Locomotive, Carriage and Wagon Department Adams could control the information that his superiors were able to see. In the first case, he provided the directors and Scott with an overwhelming case against the move of the works into the country, effectively killing the project. In the second, he was able to use his knowledge to presumably show that the works could be better managed. Thus, the senior management and directors did not have the information available to contradict him, allowing him to effectively control policy at both departmental and corporate levels. Therefore, the failings of functional department structure, the control that stakeholders had to shape policy and the different agendas that can form with the 'principals' and the 'agents,' can be clearly illustrated within the L&SWR in 1882 in a single case.