I have been always been interested in the lives of railway workers, and what has particularly peaked my interest are those individuals that worked at my local station, Hampton Court, in the Victorian period. Astoundingly, between 1849, when the station was built, and 1895, Hampton Court only had four station agents (later called station masters). The line, which came off the London to Southampton main line just past Kingston Station (now Surbiton), was built throughout 1848, and opened for traffic on the 1st February 1849. The London and South Western Railway had been interested in the tourist traffic going to the Hampton Court Palace since 1839. Therefore,those individuals that took up the position of station master is of interest as this was a prestige post.

The first Station Agent or Master was John Madigan. Like most of the staff based at Hampton Court in the period, Madigan was not from the local area. A minute of the Traffic and coaching committee of the 23rd February 1849 boasts that the company's three major projects at the time, the extension of the line from Nine Elms to Waterloo, the Windsor line and lastly the Hampton Court Branch were all 'manned without adding a single individual to the company's staff.' This indicates that Madigan had joined the railway at an earlier point. Indeed, Madigan had started as a clerk at Nine Elms in 1840, had been moved to Winchester in 1841, Botley in 1842 and Wareham in 1847.
But what of his background? On the 1851 census it shows that Madigan was from Ireland. He was 29 year old, meaning he was born in either 1822 or 23, was married, and was listed as living in the 'Corn House Building'. Having come from Ireland it is quite possible that Madigan had brought his young family over during the Irish Potato famine. Many of the Irish who came over to work on the railways during this period only took positions as navvies. However, Madigan's employment shows that as time progressed more immigrants went into the operational side of the railways taking on administrative jobs. The position of Station Agent was not as prestige as it became in the later Victorian period, yet for an Irish immigrant of only 29 years of age, running a station would have been quite an achievement. Madigan was moved to Windsor in September 1851 and the station agency was taken over by William P. Legh. 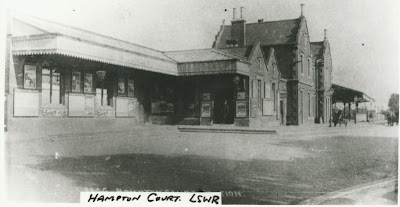 Towards the end of 1894 McDougall's health started to fail him. A Traffic Committee Minute of 23rd of February 1895 stated that at 64 years of age, and at the top of his pay scale of £110, he wished to retire as he had been certified permanently incapacitated. He was retired on the 1st February and was replaced by Mr F. Molyneaux, formally agent at Sunningdale.
The station masters at Hampton Court were probably the most unusual group of people to occupy the position of station agent at one location. An Irish immigrant, an Eton-educated man and an member of the Traffic Department's non-clerical staff, were three groups of people that were all very unlikely to be appointed to such posts. It is, therefore, unusual that an example of each were all located in the same place. Hampton Court doesn't therefore represent employment patterns typically found elsewhere in the company and makes an interesting case-study.
PLEASE NOTE: This is something I wrote 4 years ago. It was copied and pasted from a talk script I knocked up at the time, as being knocked off my pedal bike has rendered my left hand unable to type.
Posted by David Turner at 16:18