The things that I don’t know about my chosen railway, The London and South Western Railway, could fill endless journals. I have talked on a few occasions about the fact that I feel that there could be vast swathes of material sitting in draws that could answer the many mysteries about the operation of Britain’s railways. In fact, I am convinced that if everyone who had a collection of documents committed them to archives then we could learn vast amount. But hey, I can wish. It’ll never happen. As I have found, some individuals that own documents are very possessive about sharing, staunchly guarding what they consider to be their documents. Yes, the document may be theirs in a technical sense, but the information is not. Anyway I digress. 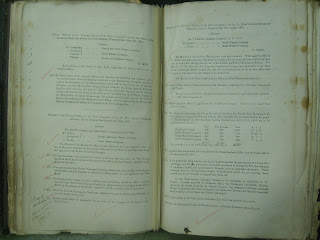 I think, however, that I have found a way to uncover more details about the operations of my chosen company. The L&SWR had joint ownership of a number of railways in its sphere of influence. The two most notable were the Somerset and Dorset Joint Railway (S&DJR) and the West London Extension Railway (WLER). It owned the first with the Midland Railway, and the second with the London North Western, London Brighton and South Coast and Great Western Railways. Thus, in both these cases the L&SWR would have had to merge their operational procedures with their co-owners of the railways for smooth operations. Some of these operational systems would have been the same and integration and combination would not have been a problem. This was the result of being in an industry where there was very little influence from external businesses and much inter-company communication through the Railway Clearing House. But, there would have been some areas where the companies operating procedures may have diverged and as such the owners would have had to reach compromises.

Subsequently, examining the operation of the jointly owned companies may show the process of negotiation each of the owning companies engaged in, thus revealing each’s operating procedures. This would, therefore, go some way to uncovering some of the mysteries about how the L&SWR and other owner companies operated their railways and made decisions. Up to this point, I have done some research on the West London Extension Railway and while I didn’t find any details of any inter-company negotiation regarding operations, I did find some very interesting (well for me anyway) information on how the WLER costed their parcels service. This data was found in the Minute Books of a conference that consisted of all the different companies’ officers. I won’t go into it here as I did write a blog entry about it a few months back.

There was one problem with this information, in that I couldn’t be sure from where the decision to cost the parcels service came from. I have found no information that it was done within the L&SWR, but this is may be because little information has survived below committee and board level. Indeed, if this was something that was discussed amongst the company’s officers, and not at board or committee level, then the information has been lost. Conversely, it may be that the L&SWR didn’t do parcels costing and, therefore, the procedure came from one of the other companies.

Up until the brainwave I will now describe, I was resigned to never knowing the answer. But, I had a thought. The Somerset and Dorset Joint Railway also had a committee of officers that would have been made up of officials from the S&DJR, Midland and L&SWR. The common co-owner of the WLER and the S&DJR was the L&SWR. If I fail to find an explicit series of negotiations over policy within the S&DJR files, and I do find within the S&DJR officers committee details of parcels costing, in addition to the fact that I have already found it on the WLER, then this increases the likelihood that the L&SWR undertook it within its own network because it is a common policy (or that this was a standard procedure within British railways).

Now, I realise that this is not a full proof method for discovering those operational details that have eluded railway historians, but it may be a way of at least determining the likelihood that some operational systems were used by different railway companies in the Victorian period where explicit information does not survive within the companies’ own files. The shame for me is that the L&SWR didn’t jointly own many more companies. If I were to increase my survey to look for operational details within three or four railways, this would inevitably increase the chances of finding common policies, increasing the certainty that they were either used, or originated within, the parent company. However, for companies that jointly owned a multitude of companies, it may work to more accurately determine operational procedures.