In my last blog entry I wrote about the training that clerical staff of some of Britain’s Railways received at the LSE in the early 1900s. The courses were set up in an attempt to educate potential managers in the skills they needed to do their future occupations. These courses were at the outset original, as they were the expression of a new point of view that had developed in the railway industry that there were skills that were unique to management. Managers could be just clerical staff raised from the ranks, but, to train them in management would increase their quality in those positions.

The case was different before the turn of the century. From my research I get the impression that new managers were simply promoted clerks based on their ability to perform their pre-management jobs and any management qualities that their superiors judged they possessed. The little classroom training that they did receive was subsequently not strictly for their own advancement, but at improving their ability to do their jobs. This training was usually limited to the instructing the clerical staff in Pitman’s system of shorthand, invented in 1837 by Sir Isaac Pitman.

Shorthand training seems to have been provided within a number of railways companies in the late 19th century. 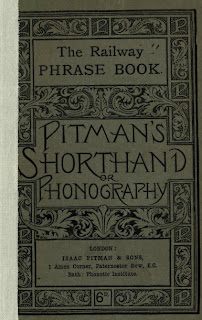 The first company to train any of their clerks in shorthand was the Manchester, Sheffield and Lincolnshire Railway (later to become the Great Central Railway) in about 1860. This was the initiative of the company chairman Sir Edward Watkin, who saw the potential benefit for the work of the company. He employed Henry Pitman to teach a class. Watkin in 1863 also took his idea to the other railway company of which he was Chairman, the South Eastern Railway, where clerks were taught by Fred Pitman. It seems from this point on, the teaching of shorthand began to spread. By 1870, Pitman's partner, Mr Carson, was teaching shorthand on the London and North Western, Great Northern, Midland, and Lancashire and Yorkshire Railways. In later years shorthand was taught on the Great Western and the London and South Western Railways. The L&SWR started classes in 1888 at the wishes of the new General Manager, Sir Charles Scotter.

In 1869 Sir Isaac Pitman published a book entitled ‘The Railway Phrase Book - AN ADAPTATION OF PHONOGRAPHY TO THE REQUIREMENTS OF RAILWAY BUSINESS AND CORRESPONDENCE,’ in which were listed many of the principal words employed by railway staff. In the introduction to the 1889 edition Pitman wrote that ‘the use of Phonography to expedite business by the clerks employed on our principal lines of railway is now becoming general.’

It is clear, however, that it became more widespread of the industry because of the transferral of an idea. For example, Sir Edward Watkin transferred it from the Manchester, Sheffield and Lincolnshire Railway to the South Eastern. However, in addition to this, Sir Charles Scotter, before becoming L&SWR General Manager, worked for the MS&L R. Thus, in a speech in 1887 to the South Western staff specifically cited that he had seen the benefits of shorthand while at his former employers and this was why the L&SWR’s classes started. Thus, you can trace a clear link between the first classes in the industry in 1860, and those at the L&SWR years later. Shorthand, subsequently, can be seen as an idea that spread because of informal links within the industry, and it would interesting to do a study of how other ideas developed within Britain's railways.