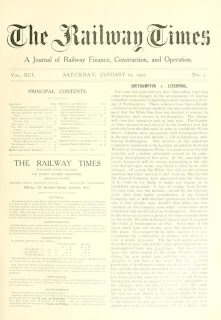 Over the course of the railways’ 200 years, many magazines and journals have been produced that commented on the industry, but which were not written by the companies themselves. Today your local newsagent will present you with a plethora of titles of this type. Amongst these are RAIL magazine for the more industry-minded individual, The Railway Magazine, for those interested in all aspects of railways, past and present, and there is Backtrack, for people interested in the history of the railways. However, the history of railway journals and magazines is a long one that stretches back to the very origins of the railway network. Particularly in the Victorian period, who was interested in the industry and how it was perceived was reflected in the nature of the publications that were started at different points.

The earliest publications that commented on the railway industry were aimed of those people who had the biggest interest in the railways, the shareholders. As such, many of the titles were appropriately named, for example the Railway Record and Joint-Stock Companies reporter (1844), the Railway News and Joint-Stock Journal (1864) and Herpath’s Railway and Commercial Journal (1843). These were joined by the Railway Chronicle (1846), the Railway Times (1835) and the Railway Gazette (1835). These magazines’ primarily focussed on the economic aspects of the railway industry. Thus, articles on the shares, new schemes, income, directors and economic health of the railway companies dominated. This wasn’t surprising given the amount of money investors in Britain were pouring into the vast number of railway projects that were started in this period. Thus, these publications were a conduit through which shareholders could make sure that their investments were secure, or, as in many cases during the railway mania of the mid-1840s, investors could find out if their investments had been washed away.

While these types of magazines continued through into the 20th Century, in the late 1900s professional journals started to become available for railway employees. Amongst these were the Railway Fly Sheet and Official Gazette (1870), which was aimed at railway officials and administrators. It later changed its name to the Railway Official Gazette (1882). Further, there was The Railway Engineer (1880), for engineers and locomotive men, as well as The Railway Herald (1887) that was started for all railway employees.

Whereas in the early years of the industry publishers had focussed on what was the important issue in the railway industry, the building, performance and financing of companies, by the late Victorian period they published these journals for the vast numbers of railway professionals that were helping to keep the industry working. The change that drove the creation of these magazines was that the emphasis inside and outside of the industry was no longer the establishment of railway companies. Rather, it was the quality of their operation. Therefore, these magazines contained articles on new innovations within the industry, changes in management procedure and practice, and news of changes within the industry. Thus, their aim was to become staff magazines, but which were published by external actors who were taking advantage of an increasingly professional and mature industry.

The last set of railway magazines to be established were those created primarily for individuals who were not investors or employees, but who had an interest in the industry. The two most notable publications were the Railway Magazine (1897) and The Railway and Travel Monthly, (1910) which was started by one of the former’s disgruntled journalists. Both were very similar publications in that they contained articles on aspects of the industry for individuals who wished for a ‘light’ read. So, the September 1912 issue of The Railway Magazine carried articles on ‘Theatrical Traffic on the London and North Western Railway’, ‘British Locomotive Practice and Performance’, ‘The Central London Railway: Its Extension East and West’, ‘The Melbourne to Adelaide Express’, ‘Rambles on the Caledonian Railway’ and ‘The Smallest Railway in America.’ 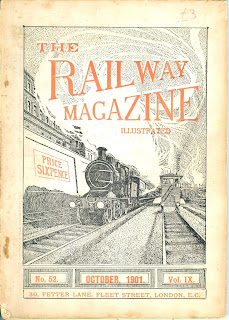 Essentially, these publications reflected the fact that the industry had passed the profitable and mature phases of its history, and was now ingrained in the fabric of the nation. The railway industry was something that everyone interacted with every day, which employed thousands of people and which was vital to the country’s economy. It is, therefore, unsurprising that these later publications were designed to bring what went on within the industry to the general public in a highly accessible manner, and which showed them how they could benefit from it. It also kept the public up to date with any changes that they should be informed of. The whole nature of the publication was summed up than in the section in The Railway Magazine called ‘The Why and the Wherefore,’ in which readers could write in and ask questions about the industry. Thus, these publications reflected the public’s new interest in the railways that viewed the industry as a public service.