Woking Model Railway show was my destination yesterday morning. Held at the leisure centre, this event is one of the local highlights of the model railway fraternity’s year. With 69 stands, of which 26 were layouts, it has always been a good show, getting the balance between model railways, trade and societies, just right. This year I was surprised to see that there was also a stand by the South Western Circle, the support group for all things London and South Western. This made me smile.

It had been quite some time since I had visited a model railway show. It is not for lack of wanting to go to some of the local ones, I just haven’t had the time. The virtue of the Woking show being quite small, while at the same time being rich in content, is that the contrast between the different types of layouts come more into focus. Now, I can hear a cry that all layouts are different, that no two alike. I beg to differ, layouts can be the same in ways that go beyond the aesthetic level. In some ways layouts are, in my head at least, divided into those that are innovative and interesting, and those that are formulaic, boring and don’t try and do anything new.

Firstly, there were a number of layouts at the Woking show that I only gave a passing glance to as they were simply long ovals of track, small ovals of track, Great Western (far too much of that) or their scenery was very sparse. I’m sorry, but I honestly have seen layouts of this type far too much in my life. Take for example one layout that was simply a long oval of track, with a junction at one end and the obligatory station with a yard. If I could count the number of times this layout format has appeared at shows, I would be counting all day. While it may satisfy the children, as they are mesmerised by the whizzing trains, I get the impression that kids are generally enticed by any form of train-related movement. Therefore, in my head at least, the layout in question was aimed at no one. It was a club layout that really should have stayed at home or in the club room.

In my opinion, it is simply too easy to do a layout that is uninteresting. The layouts that really encapsulate me, which make me stay and watch for a while, are those that try to innovate and try and do something different. I have roughly sorted the categories out. First there are the ‘time-shift’ layouts, those that try and model an era of railway history that is under-represented. So, for example there are very few pre-grouping layouts doing the rounds. Modelling the period before 1923 when there were 100+ railway companies seems to me to be an attractive prospect. But, alas, there are few modellers that’ll commit to such a task given the time needed to invest in such a project. 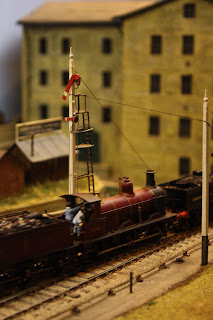 This said, there were two such layouts present at Woking, Ogden Fold (shown) and Hope-Under-Dinmore, that both modelled the London and North Western Railway. The second era that I think has had little attention, and which wasn’t represented at Woking, was the when British Rail went ‘Blue.’ However, given the lack of colour, for me this is a bit of a turn-off. I do hope to also venture into this period when I get the time, modelling the London and South Western Railway in the 1880 and 90s.

The second type of layout that really captures my interest are those that show areas of the rail network, past or present, that are different. I call these ‘snapshot’ layouts. My favourite layout at the show was Abbey Road. I have over the last few years become a fan of the underground. I don’t mean travelling on it; after all, that is a nightmare. What I do love is its unique and wonderful history. Therefore, this layout, that showed a mix of underground stock, with meticulous attention to detail at the line side, was a simply wonderful and unique layout (shown). 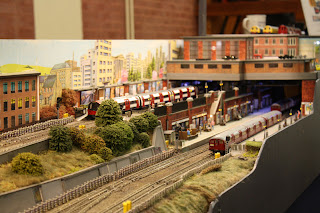 The second layout that held my interest was Lulworth Camp and Gas Works, a military layout which is set near an imaginary town in Dorset. Military layouts have appeared more frequently in recent years and this is a fine example of what can be done with a wartime setting. There are tanks, artillery pieces, trucks and men everywhere on this layout and it looks like a melee. However, it conveyed well the order that can be found in apparent chaos. Overall, we need more of these layouts and I am surprised that there aren’t more simply depicting ‘snapshots’ of railway operation. I have never seen a layout of a marshalling yard, and there are few that illustrate railway companies’ works or locomotive depots.

Lastly, there are the ‘journey’ layouts. These are divided into different sections which are all distinct from each other but interconnected. So, for example, a layout may have three sections, one being the works, one being the coal yard and another being the exchange sidings. The action on this layout takes place by trains going from one section to another and then to another performing a function. In essence, you, the observer, can follow an industrial process from start to finish or journey with passengers from one station to the next. A number of layouts that were present at Woking were of this ilk. These were Purbeck (shown), showing stone mining at that place and which contained some of the best modelling I have ever encountered, and Bourne Valley Railway, that was also narrow gauge. Of course, ‘journey’ layouts are much easier when using narrow gauge or the smaller gauges (such as N and Z). But, there seems to be no reason why with a bit of ambition there can’t be more of these layouts in the bigger scales. 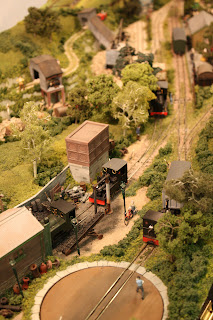 Overall, if railway modellers want to keep people’s interest, if they truly want to draw people to the hobby, and if they want the public to turn up to shows and exhibitions, then there must be verity within the hobby. By trying to come up with innovative and interesting ideas for layouts within the three categories listed above, the railway modelling community can achieve this aim. Overall, I would like to just say that Woking Model Railway Exhibition was one of the best that I have ever been to. There was a very good range of layouts to keep everyone’s interest. The organisers clearly grasped the importance of not filling the halls with boring layouts.