Railway Clerks and the LSE...Clerical Training in the early 1900s

In the 1890s and early 1900s Britain’s railway companies introduced many policies to try an affect the quality of their management under increasingly stringent government regulation and more constrained trading conditions. One of the most interesting outcomes of this period was that the railways started to train their employees at external institutions, rather than just relying on them to learn their duties ‘on the job.’ The first group of employees to become trainees were the clerks of the railway companies.

While many companies, including the London and South Western Railway, had been encouraging their staff to take up shorthand classes in the 1880s as a way to advance their careers, it wasn’t until the 1890s that railway companies became interested in sending their employees on long-term training and development courses. The first railways to take such a step were the Great Eastern (GER) and Great Western Railways (GWR), who’ paid for some of their clerical staff to attended a series of lectures given at the London School of Economics (LSE) by William Acworth, at that time a railway commentator. 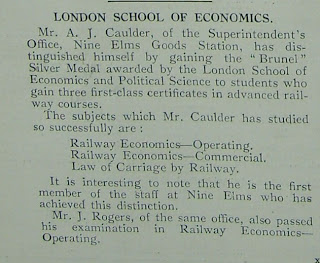 It wasn’t until the early 1900s that formal courses started to develop. In 1901 the LSE approached the major railway companies with a view to running courses on railway management at the University. The London and South Western Railway’s (L&SWR) board certainly didn’t take up the offer and the advance was ‘to be declined.’ It is unknown for what reason this was, but this decision was made after consultation with the boards of the other railway companies. Therefore, it is a possibility that there was actually industry-wide apathy over such training.[1]

Yet, in 1903 seven companies, including the London and North Western, London and South Western, Great Western, Great Northern and Great Eastern Railways, sent some of their London-based clerks to the courses at the newly formed Railway Department of the LSE. Over a number of years the students were able to obtain a degree in transportation[2] In the first term (1903-04) courses, which ran from between 3 and 12 lectures, [3] were available on 'The Economics of Rapid Transport,' 'The Law Relating to Railway Companies,' 'Economic Factors in Railway Administration,' 'Railway Statistics in England and Foreign Countries' and 'The Law of Carriage by Railway.'[4] It is unknown to what extent to which examination was involved; however, essays definitely were submitted for ' The law of Carriage By Railway' and 'Economic Factors in Railway Administration'[5]

By 1914 the range of courses available had expanded, encompassing engineering aspects of the railways, locomotive operation, economics, business and accountancy. However, four topics remained at the core of the degree, under the titles of Commercial, Economics, Law and Operating. All had exam assessments, and essays were required for 9 of the 16 courses available. Generally, by this point courses were between 20 and 30 lectures a term, however, shorter courses were introduced. Additionally, since 1905 students had to attend at least one of the 7 core courses along with a number of short courses to obtain the qualification[6] All students on courses received grades of either first, second or third class, and three first class passes would earn an individual the ‘Brunel Medal.’
Overall, the LSE courses broadened the experience railway clerks on two levels. Firstly, they allowed them to meet fellow clerks from other railways, and would have served as an informal forum for them to share ideas and experiences. Indeed, as an indicator of these new linkages, in 1909 a Railway Students Association was formed.[7]This shut down during the war, but was re-formed in 1919.[8]

Secondly, and more importantly, it is clear that the courses were designed to give attendees a broader knowledge of railway operations. This was in response to the organisational institutionalisation that had developed within the British railway by the turn of the century. In 1911 the head of the teaching staff at the school, Mr Stephenson, wrote:-

'Students come from a variety of departments and offices. In many cases their knowledge of railway work is confined strictly to the limits of work done in their own departments, and often to only a small section of such work. Of the rest of the work of the railway they are supremely ignorant.'[9]