Rule Books tell us more than the just the rules 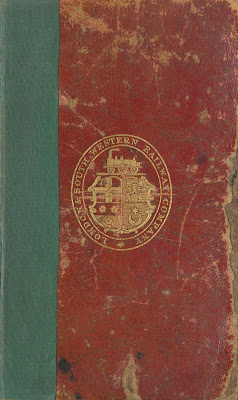 The rule books that railway companies issued to their staff were probably the most important document that they had on their person. It governed everything that they did and any employee who broke the rules would be subject to some form of punishment, ranging from fines to dismissal. The rule book was, therefore, a way management established order over a large number of personnel.

Now that the railway companies of old have passed, the rule books of a company can show us the rate of change on the railways. Changes in procedure found in the books were, in turn, the result of the changing technology of the industry. So, the interval between new editions can indicate the level of this change that occurred within the industry. For my example I will use, unsurprisingly, the London South Western Railway’s rule books. From the information that I have gathered, I have determined that the L&SWR issued the staff with updated versions of the rule book in the following years:-

Between 1845 and 1864 the staff of the company was inundated with changes in the rules, with 5 new rule books issued in 19 years. This was an average of a new rule book being issued every 3.8 years. Clearly, the industry was changing rapidly in this period. Everything in the company evolved, from the way that the track was laid, right through to the locomotives that ran on it, and this was reflected by the L&SWR management issuing very regularly new rule books that contained updated and additional rules relating to the developments.

Naturally this meant that the rule book got longer and more detailed over the period. The 1845 rule book, which was called a ‘rule book for enginemen and firemen’, had in it a small section at the front with instructions for ‘Station Clerks’ (the first station masters). This section was only 2 pages long, with large text. However, jump ahead to 1864 and the section for station masters was 18 pages long and smaller text. Additionally, in 1845 there were only 8 rules directed at Station Clerks, whereas in 1864 there were 64. The frequency of issue and the changing size of the rulebooks, therefore show that in the period the industry was rapidly evolving.

Between 1864 and 1890 the number of rule books issued declined, and only 3 were produced (one every 8.67 years). This is indicative of the fact that the pace of change within the railway industry was slow. By the 1860s train operations, procedures for the transit of goods and passengers, and a host of other aspects of company operation, had been standardised. The British railway industry had by 1870 entered the ‘mature’ phase of railway operation.

Further, the lack of change is indicated again by the fact that the size of the rule book didn’t change. The 1864 book had a total of 302 pages in total, whereas the 1884 rule book (the 1890 rule book not being available) had only 297. Further, the instructions to station agents only increased in length by a page to 19. These rulebooks were evidently a product of a period in railway history when evolution and change was slow within the industry and procedure had become standardised.

However, after 1890 the railway companies of Britain were under considerable strain as profitability declined. It was with this in mind that they started to investigate many new innovations and make changes to operating procedures to keep costs down, provide higher levels of service to customers and improve the efficiency of traffic management. Some of these changes included pneumatic signals, electrification projects, marshalling yards, better coaching stock and higher capacity wagons. Thus, these changes are indicated by the slightly increased number of rule books issued in the period. Between 1890 and 1921 the L&SWR produced 4 rule books, an average of one every 7.75 years. While the level of change was evidently not as rapid or drastic as in the first period, as many new changes were simply adaptations of existing procedures and technologies, there is some cause to say that the companies produced more rule books to accommodate the increased number of changes that occurred in the industry.

What is of interest, and is in contrast with the trends outlined, is that the rule books issued after 1890 actually shrunk. The 1904 one had 167 pages, the 1912 one had 164 pages, and the 1921 edition had 183. This is in part explained by the fact that the L&SWR reduced the font size. Additionally, some departments, such as Engineering, produced their own rule books for their staff which would have meant fewer pages in the general rule book. Unfortunately, I am unable to compare the amount of space given over to the instructions for station agents, as the section was not clearly identified in the three rulebooks cited.

Overall, it is clear that the number of rules in the L&SWR rule book in this period did not significantly change in volume. This demonstrates that in making changes to the company’s network it simply adapted existing systems and procedures. As such, the changes introduced weren’t as drastic as those made in the early years of operation. This said, the increased frequency of the issue of rule books shows that the L&SWR was making regular alterations to the network.

I have shown how the changes in the complexity of the industry, and of the L&SWR’s operations, can be charted through the frequency that rule books were issued to the staff. The railways moved from growth and increasing complexity, to maturity, and then to a period when they were under threat. Subsequently, if I can infer all this without actually reading the text of the rulebook, then who knows what a more detailed study of them allow me to discover.