The history of railwaywomen before World War One (and more generally) is hidden from view. While there has been a rise in the interest in the topic, (see Helena Wojtczak and Rosa Matheson’s books, and the work I have presented in this blog) much still needs to be done to answer the many questions about women's employment on Britain's Railways. A few questions outstanding are for example:-

· How widespread was female employment on the railways at different points?

· In a patriarchal society, how did women go about gaining employment on the railways?

· Did geographical region in which a woman lived or the local railway company affect what employment they received?

· What factors pressured railway companies in expanding women’s employment opportunities around the turn of the century?

· Did the attitudes and opinions of company directors affect women’s employment opportunities within railway companies?

· Did all types of jobs given to women on Victorian railways become available at the same time?

I could keep listing questions, but as can be seen there is still a lot of research that needs to be done in the archives. With regard to the London and South Western Railway (L&SWR) I have answered some of the above questions in my blog entries. However, I have now come to a dead end with regard to that company as I have gone over every file with a fine tooth comb looking for data. So, the search needs to be expanded to the other railway companies operating in the period.

With this background in mind, I will now describe three important events in the history of women’s employment on the London and South Western Railway. I will, in each case, state some of the questions that are yet to be answered with regard to them. I will use as a reference point Helena Wojtczak’s excellent book Railwaywomen, to provide some context for my findings. However, I should stress that while her book is a very good overview, for the Victorian period it is not a detailed text on female employment within Britain’s railway companies.

1850 - The first recorded female employees – On the 21st June 1850, the Traffic Committee of the company entered the following in the Minute Book:-

This is very early in the railway’s history, and only 12 years after the L&SWR started operating. The questions arising from this minute are many. Was the job of gatekeeper the earliest form of women’s employment on Britain’s railways? Wojtczak stated that three female ‘railway labourers’ can be found in the 1851 census as working on the building of the South Eastern Railway (Wojtczak, 2005, p.1). Therefore, there is some weak evidence that women were working in other capacities on the network. As such, the question does remain in what capacities did women work at this time? Additionally, was the L&SWR following trends set by other railways, and can other companies be found that started employing women at an earlier date?

1871 - The first recoded female telegraphist – The L&SWR for many years categorised telegraph clerks and junior clerks under the all-encompassing heading of ‘clerical staff.’ The distinction between the jobs was even less at country stations where telegraph clerks generally had other duties. But, those women employed on the South Western as telegraphists were strictly limited to telegraph work as far as I can gather. The first woman to be employed in this capacity was Miss Fifield, and her employment was confirmed as follows on the 30th November 1871:-

Mr Fifield's Daughter – Read letter from Mr Fifield Agent at Oakley Station requesting that his daughter may be appointed as Telegraphist at that Station at a pay of 7/- per week.

Again, I turn to Wojtczak’s book to provide some context. It seems that the L&SWR was behind other railways when employing women as telegraphists. The Edinburgh, Perth and Dundee railway employed their first woman telegraphist at Edinburgh Waverly Station in 1858. Further, in the 1861 census Mrs Annie Bond appears as a telegraph clerk at Eastbourne on the London Brighton and South Coast Railway (Wojtczak, 2005, p.31). Again the questions are many. It remains to be seen why some railways were slower than others to employ women as telegraphists? Was there a preference for employing women as telegraphists at country stations only, as in the country jobs for women were limited? Did women receive the same starting pay as their male counterparts? Lastly, was the timing of when women were employed dictated by the attitude of the different companies’ directors? 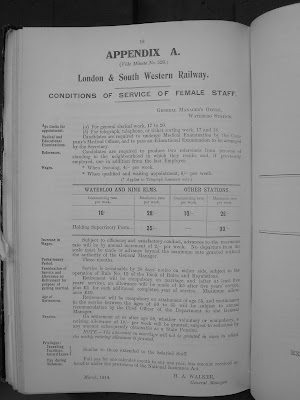 1914 – The formalisation of women’s employment on the L&SWR – On the 27th March 1914 the Traffic Officers conference of the company introduced a formal policy for the engagement of female staff in clerical, telegraph, telephone and ticket sorting positions. The minute was as follows:-

Employment of Female Staff – Referring to minute No.528 of the Traffic Officer's meeting on the 24th instant, the proposal to employ female clerks in some of the company's offices on the conditions mentioned in Appendix A was approved and the General Manager was authorized to make arrangements for carrying it out. [Appendix A is shown] (TNA, RAIL 411/40, p.113)

It seems from Rosa Matheson’s work that the L&SWR was again slow in employing women en masse in this period. The Great Western Railway (GWR) started employing female clerks in 1908, and by 1906 the North Eastern Railway (NER) employed 94 women, while the London and North Western Railway (L&NWR) employed 250 female clerks (Matheson, 2002, p.137). While, clearly, the introduction of this policy by the L&SWR was a step towards increasing the number of female staff, the question remains as to why the company was behind the others, and what factors meant that the other railways started to employ female clerks earlier? Further, this policy was only applied to only single, unmarried women that were employed. It therefore begs the question as to why the other major group of women who worked on the railways at this time, the widows of company employees, did not receive any formal terms of employment at the same point? Lastly, there is again the question as to whether women received the same pay as their male counterparts? The answer to this question is obvious given the period of history I am dealing with. But, to what extent did women receive less, and was there variance between what the different railway companies paid them?

Overall, this piece has shown only a selection of the outstanding issues that need to be addressed in the history of Britain’s railwaywomen. As such, I hope as my career progresses to continually return to them. On a finishing note, I would like to say to anyone reading this that if they do archival work please send me anything you find on the topic (with reference details of course), as I am trying to obtain as much information as possible.