Beeching, Serpell, McNulty and the Future of Britain's Railways

Apparently, and I am not entirely sure how this passed me by, there is a ‘value for money’ review being undertaken on Britain’s railways. The man at the helm is Sir Roy McNulty (shown) who apparently is an air transport specialist and was the former head of the Civil Aviation Authority. Exactly, therefore, how worrying his appointment is, is uncertain, as McNulty’s career history includes both public and private activities. The reason for my confusion stems from the fact that those who have previously tried to get more ‘value for money’ out of the railways, namely Sir Richard Beeching (the Railway Satan as he has been called) and the more forgotten Sir David Serpell, had two different backgrounds that clearly shaped the way they conducted their reviews of the costs of the network. Therefore McNulty’s mixed career history means that his report could be anything from fair and even handed to a massive axe-swing in the direction of Britain’s railways.

So how should Beeching and Serpell’s reports be judged in light of their career histories? First, let us turn to Beeching. Beeching, who came to British Railways from ICI, doesn’t really have a good reputation amongst the public. But then again I have always felt that the man has been treated unfairly in that he was brought in to do a job and he did it. In 1963 he wrote his famous report, The Reshaping of British Railways. His proposals rather cheesed people off as he proposed closing 6000 miles of railway (out of 18,000) and shutting 7000 stations. This would make it possible for British Railways to lose 70,000 employees over three years. But then again it was the Secretary of State for Transport, Ernest Marples, who brought Beeching in, and Marples was the one who actually implemented the report’s recommendations. Additionally, Marples was a fan of road transport given he had owned road-building company (Marples-Ridgeway) who had just got the contract for the M1. Therefore, it is clear that the prism through which Marples saw the railways was simply as a wasteful, inefficient business, and it is unlikely that he acknowledged its social or economic benefits to the nation, especially as he was so married to road transportation. Simply put, the railways were only a drain on the nation’s finances. Therefore, in response to the profitability problems of British Railways, he brought in a businessman (Beeching) to solve a business problem and once his recommendations were implemented they did irreparable damage to the network. Beeching was, however, not a railway professional and didn’t have experience in network industries. As such he simply looked at the railways as a business and not its social or economic benefits. Therefore, was the outcome really that surprising? I think not. 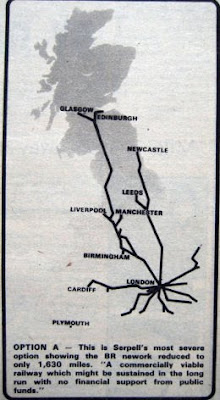 While the Beeching cuts are well known about because they actually occurred, the Serpell report, released in March 1983 has largely sunk into the bog of history because none of it got implemented. On a backdrop of a suffering economy, British Rail’s revenues decreasing and the lowest number of passenger journeys taking place in the network’s history, it was ordered by the Thatcher Government to look at the long-term role of Britain’s railways and make British Rail pay. After much work Sir David Serpell, a long-term civil servant, recommended a range of ‘options’ to change the network. The first, Option A, would reduce the rail network by 86% and the passenger train miles by 56%. In short, all that would be left would be the East, West, Great Western and Great Easter main lines, as well as a number of main lines to the south coast (the plan is shown). Yet, while everyone has focussed on this option, principally I presume because it looks so horrible, people forget that he presented three others. In Option B the cuts proposed in Option A would be implemented, but with the suburban network remaining. Option C kept much of the network in place, but with the removal of loss-making services (however there were three sub-options that can be looked at on Wikipedia if you so wish). Lastly, option D ignored the main goal to make the railways profitable and retained lines to populated areas with over 25,000 people. However, many small stations would be closed.

Serpell I think has also got a bad reputation, however I think he was a better man for the job he was asked to do than Beeching was for his. If I listed his civil service career between 1937 and 1982 it would take a whole paragraph. However, some of the major departments he had worked in were the Ministries of Food, Fuel and Power and Trade, the Treasury, the Department of Education and the Board of Trade. He also had worked for National Conservancy Council, the Ordinance Survey Review Committee and had been a member of the British Railways Board (BRB) between 1974 and 1982. In sum, Serpell had had a varied career that brought him a lot of experience in many government departments and plenty of these dealt with social, rather than economic, issues. He also had some (unquantifiable) experience of railways being on the BRB. Therefore, given the cost cutting nature of the Tory Government of the early 1980s and the tremendous economic constraints that government put the nation under, I feel that perhaps Serpell did well given his circumstances. Everyone screams and shouts about the first option, however the range of options that he presented does suggest that he was thinking more deeply than Beeching about the rail network. Firstly, in the age of austerity of the early 1980s he satisfied his brief of presenting different options to make Britain’s railway network pay. Fair enough, that’s what he was asked to do. However, the mere fact that he presented Option D, that defied his brief, suggests that despite being constrained by his environment of economic stringency and a cost-cutting Conservative Government, he did have an eye on the social and economic implications of rail transport. This, I would suggest, may have in part stemmed from his varied civil service background that showed him that how a range of different government agencies added to the nation’s health indirectly. I think, for Serpell, he had to show that railways were not just about the ‘bottom line’ as they were for Beeching, Marples and many in the Thatcher Government.

Thankfully, the Serpell report was dropped quietly because of the outcry. Indeed, throughout the mid and late 1980s passenger numbers rose and the issues confronting the network seeped away. However in the current climate we face new challenges and the coalition has deemed it necessary to commission another report looking at the ‘value for money’ of the rail network. As stated this will be under Sir Roy McNulty, the former head of the Civil Aviation Authority. He will also be assisted by some unspecified ‘rail professionals.’ Considering his background alone, McNulty has some of the attributes of both Beeching and Serpell. Firstly, like Beeching, he has had an extensive career in business, working at Chrysler UK, Harland & Wolff, Peat Marwick Mitchell & Co., Short, Bombardier Aerospace, Norbrook Laboratories Ltd, and the Ulster Bank Ltd (amongst other things.) Yet, in his more recent years, like Serpell, he has worked for the government on the Olympic Delivery Authority, the Steering Group for UK Foresight Programme, the Northern Ireland Growth Challenge, the Technology Foresight Defence and Aerospace Panel and the Department for Trade and Industry’s Aviation Committee. Admittedly, these were consultancy and committee posts, and not like Serpell’s career in the Civil Service, yet, it does mean he was engaging with governmental activities of a social and economic nature. Lastly, very much like Serpell, he had his spell on a high-profile transport body as he was head of the Civil Aviation Authority.

Therefore, with this résumé it seems that the impending report could go one of two ways. He possibly may do a Beeching and recommend cuts to services, lines and the suspension any new developments. However, he could, and I think this is more feasible given the record rail usage at the moment, recommend cuts and efficiencies within Network Rail (which has infrastructure costs 30-50% higher than those on the continent), the suspension of any large capital investment, changes to the franchise structure and the cutting of some of the most unremunerative services. Thus, this would in part be like of some of the less violent options put forward by Serpell. One thing is for certain, the cost of maintaining and running the British railway network has to come down, and McNulty’s background and experiences will in some part shape the outcome of the review like those of who were tasked with the same job before. On the flip side, we don’t know what part of his past will have the greatest effect on the report and therefore we wait…biting our nails.