Document of the Day - SER Notice of Special Traffic 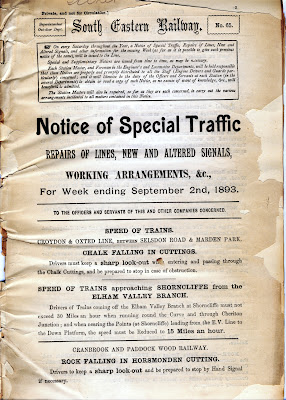 This is probably one of my most fragile documents because when I got it out of the packet it literally started to disintegrate. Indeed, I think in the year or so that I have had it I have never got it out and this is why I was unaware of its fragility. One of the questions that I think needs more research is how alike the operating procedures of Victorian Railway Companies were. If all the companies operated in similar or identical ways, this would mean that the room for new and innovative ideas regarding operating procedures and efficiencies would be reduced. If they operated in different ways information exchange and innovation may have been prevalent within the industry. This document from the South Eastern Railway in 1893 is interesting as it is almost identical in form, tone, appearance and procedure to those circulars regarding Special Traffic that were produced by the London and South Western Railway in the period. Therefore, this is a sign that many railway companies by the late Victorian period may have adopted similar, if not identical ways of of working, that may have meant that the industry was stagnating. Although, with just this one document as evidence, I can't make any conclusions really.
Posted by David Turner at 11:02