In the late 1800s the railways were still dominant in the transportation market. If you wished to move yourself, your luggage or your goods, the railways were only way to do it quickly and efficiently. However, the railways’ profitability and performance was declining in this period. This was possibly for a number of reasons such as declining management quality, ingrained working patters, managerial empire building and intrusive and costly and governmen legislation. While I wouldn’t like to go into these factors in detail, it was clear that the railways weren’t doing as well financially as in their formative years. In short, something needed to be done to get the profitability back up, and the London and South Western Railway (L&SWR), who had suffered like most railways, set to work in the early 20th Century. In this blog entry I will describe briefly the reasons for two major decisions that the L&SWR took to attempt to secure the profitability of their passenger service between 1898 and 1922. These are the rebuilding of Waterloo station and the suburban Electrification project. I will show that the initiating factor for investment changed on the L&SWR, as it did within many companies in the early twentieth century, because of a change in the business environment. 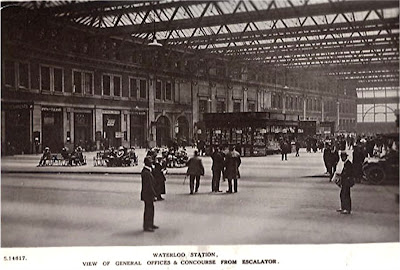 Has anyone ever read Jerome K. Jerome’s 1889 book Three Men in a Boat? In it he described the problem with Waterloo Station in the late 19th Century.

“We got to Waterloo at eleven, and asked where the eleven-five started from. Of course nobody knew; nobody at Waterloo ever does know where a train is going to start from, or where a train when it does start is going to, or anything about it. The porter who took our things thought it would go from number two platform, while another porter, with whom he discussed the question, had heard a rumour that it would go from number one. The station-master, on the other hand, was convinced it would start from the local.”

While I won’t go into great detail as to why the station was so difficult to navigate, in short, it had been built up bit by bit over the years since 1848. The L&SWR hadn’t conducted complete rebuilds of the station as more capacity was required to accommodate the traffic, but rather had just ‘bolted on’ new platforms, canopies and facilities every now and again. Thus, in 1898 Waterloo actually had three stations that were all connected; Central, which was the old 1848 structure, South, added in 1878 and North, dating from 1885. This was confused by the fact that the 18 lines running into the station only shared ten platform numbers.

In a sense, this was the last of the L&SWR’s great projects that was reacting to the physical constraints of the company’s infrastructure. To look at any business decisions before 1900, the majority were made because the continually rising traffic meant that the company required extra facilities to deal with that fact. Thus, the company were never exceedingly worried that the expense would be unnecessary as in the long run the expected revenues from passenger growth would eventually cover the cost of construction. This was essentially because the railways were operating in a period when they had monopolies on transportation in most places and did not see any challenge to their unique position. Thus, the Waterloo rebuild was continuing this pattern of decision making, but, it was the last large-scale investment that adhered to it.

The station was completed in 1919 and on the 21st of March 1922 was officially opened by Queen Mary.

There were a number of things that affected the way that the L&SWR viewed their suburban passenger services in the early 20th century, most of which involved electricity. Firstly, the company opened its long-awaited extension to Bank Station via the Waterloo and City line. Electrically run, this was a good testing bed for electric trains within the L&SWR’s sphere of influence. Yet, at this point the L&SWR showed little interest in using the technology on its overground services. Further, up to 1905 the company cooperated with the Metropolitan District Railway Company when they electrified their lines to Richmond and Wimbledon. The Chairman of the L&SWR, Campbell, said he would watch how the new services did with interest. Indeed, the result was that passengers deserted the slow L&SWR steam hauled routes to the city in favour of the clean electric trains. The most important event came when the London United Tramways Company (LUT) started extending into the L&SWR’s suburban region. They reached Hounslow in 1901, Twickenham in 1902 and Hampton court in 1903. Further, in 1902 the LUT received permission to extend to Sunbury and Wimbledon and was looking at building lines to Staines. Finally, in 1906-07 the LUT extended to Kingston, Surbiton, New Malden and Wimbledon.

Thus, the L&SWR started to suffer in its suburban zone. According to Faulkner and Williams in 1902 the L&SWR lost 64% of its receipts on the Hounslow route because of the LUT’s activities. Indeed, if we consider the table above we can see that in the 10 years after 1900 the growth in the number of passengers, passenger train miles and passenger revenue slowed considerably in contrast with the 10 years before. Thus, there were worrying signs that underlying idea that had endured for decades, that the growth number of passengers would continue unabated, was probably doubted. Indeed, at the 1913 General Meeting, the investors were told that the company had lost £100,000 in revenue and the passenger numbers were by then falling by a million per year. Thus the company’s had, by that point, become a reality.

The first stage of the electrification plan was confirmed by the board in December 1912. The proposed routes to be electrified are shown in the picture. The move was therefore different from the rebuilding of Waterloo. Waterloo was rebuilt based on the assumption that Passenger traffic would continue to rise and that there would be no alteration in this fact. However, the Electrification scheme was adopted because of exactly the opposite reason, a fear that passenger traffic, and profits, would decline. Therefore, the attack on passenger traffic by the company’s first real competitors in the suburban passenger market must have been unexpected given the prior history of the L&SWR. Thus, they were made the decision because they were trying to protect their business.

The company completed the planned suburban electrification in the years after 1912, connecting to Wimbledon, Kingston, Hampton Court, Hounslow, Claygate and Shepperton by 1915-16. It was the Southern Railway that would continue the L&SWR’s work.

In the context of the profitability and performance problems of the British Railway industry in the late Victorian period, what could be said about these two events? Firstly, it is evident that despite the failing profitability of the period 1870 to 1900, it wasn’t substantial enough to change the company’s reaction to the increased passenger traffic and the need for greater facilities. Faced with capacity problems they did not try alternative ideas to solve them, for example reducing the number of trains running into Waterloo or closing stations to reduce the number of passengers carried. Instead, they continued with the long-standing pattern of rebuilding existing facilities so every passenger would be accommodated, confident in the knowledge that the cost would, eventually be covered. However, they were shocked into action when the passenger growth, that had always been expected, did not materialise because of new and unexpected competed forms of passenger transport. As such, they were forced into reacting to their business environment by trying to protect the traffic they did have.

Thus, what these two large L&SWR investments symbolise is an important moment in the history of Britain’s railways. The early 1900s were when companies stopped considering that Traffic would always continue to rise, but rather, tried to protect what they had because the business environment had changed. In essence, the period was when Britain’s railway’s would start their long decline towards Beeching.