Document of the Day - New and Altered Signals Circular 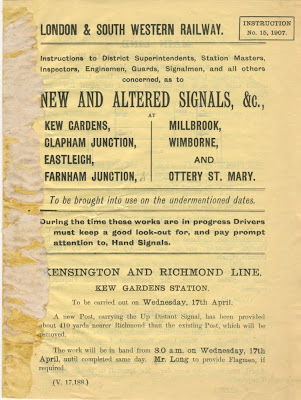 This document is one of many circulars issued by the London and South Western Railway (L&SWR) to all District Superintendents, Station Masters, Enginemen, Guards, Signalmen and 'all others concerned' that alerted them to upcoming changes in the company's signalling arrangements along the line. This one was issued on the 10th of April 1907 and featured changes in only three of the four company's districts (Metropolitan, Central and Main Line). Circulars were documents that were produced in the same vein as other 'documents of the month' that I have presented, namely to alter established working patterns and alert staff of changes to operations. Thus, many were produced each month. But did this system of constant alteration of established patterns of working mean that no one looked seriously at actual working procedures? I possibly think this may be the case and it may be a factor that contributed to the decline in efficiency in the the late Victorian period. I am particularly fond of this document as it has changes to signals at Kew Gardens and I work opposite Kew Gardens station! Again, click to enlarge. 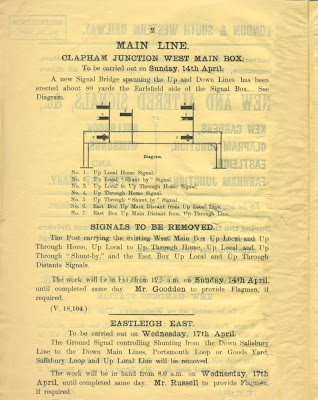 Email ThisBlogThis!Share to TwitterShare to FacebookShare to Pinterest
Labels: Circulars, Document of the Day, London and South Western Railway