'Big Society' and the railways...any options?

I was thinking how under David Cameron’s idea of a ‘Big Society’ (BS) the railways could be included. The only reason I was putting my mind to this was because in his launch speech mentioned transport as an area where volunteers could play a role. So I tried really hard to think how BS could be applied to the railways by screwing up my eyes and thinking with all my might; but, alas, little came forth and in total I only came up with one idea. I think that the reason I had a lack of ideas is because the railway industry is almost impenetrable for volunteers as there are a number of factors in the way. 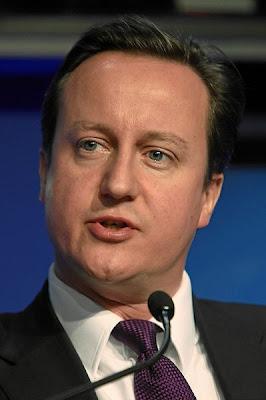 This said, I’m sure that the Train Operating Companies would be more than willing to take on some volunteer ticket collectors. Oh, excuse me, I meant ‘Revenue Protection Officers’ (Thinks: “Protect the revenue men, it’s being attacked”). Or what about volunteer carriage cleaners, office staff or even drivers. There must be a veritable cornucopia of volunteering opportunities for the public. Alas, it will never happen. Firstly, quite rightfully the unions would kick up a fuss. They’d complain about an influx of volunteers taking over their members jobs, reducing safety and the general annoyance of having less than knowledgeable members of the public getting in their way. Indeed, I think the latter may be a particular problem when you think of the number of people who will want volunteer on the railway by simple virtue of the fact that they are interested in the industry and its history.

The second problem with introducing BS to the railways is that the TOCs operate across county and borough borders. Therefore if we take my local outfit, South West Trains (SWT), they operate in such diverse places as Greater London, Surrey, Hampshire, Berkshire, Dorset, Devon and West Sussex. Now if we expect all the ‘big society’ volunteers to group together across this wide area then that’s fine, I’m all for that. But someone is going to have to pay for it to be organised and the individuals to be transported, and that isn’t going to be Cameron, because he hasn’t any money and I suspect that the whole BS thing is to reduce cost. But let me get off my political hobby-horse and get on my railway one.

So what is my big idea for BS? How can I dodge the bullet of not annoying the unions while at the same time keeping things cheap and local? Some time ago on my last blog (which if you can find it it’d be a miracle, because I can’t) I wrote that local stations are things that communities can help improve. Of the railway infrastructure the public interact with two elements the most, the trains themselves and the stations. Now the trains are a ‘young’ piece of railway kit and unless you are lucky most rolling stock on the network today will be only up to 25 years old. It is also incredibly hard to get attached to a moving electric carriage which, at the end of the day for the general public, is really just boredom in railway form.

So that only leaves the station. The station is not just a replaceable piece of kit. In many places all around Britain (and indeed throughout the world) some railways stations are very old and part of the fabric of the local town or village. Take for example my local station Hampton Court. Built in 1849, it is now coming up to the ripe old age of 172 years old. It was designed by William Tite who was one of the most noted architects of the 19th in a style that was to match Hampton Court Palace. It is a magnificent building. However, years of neglect mean that it now looks like a disaster; boarded up windows, a skip outside and a funny smell lingers if you catch it on the right day. Thus, it is now a shadow of its former self.

It was Hampton Court that got my mind racing. The station is part of the fabric of any local community, and in some places is its main exit or entrance. Therefore, what if communities looked after and maintained the superficial fabric of their stations? Indeed, if Cameron really wants people to adopt BS then getting a number of them to ‘adopt’ a local railway station could actually be a useful and productive thing. Further, moves of this nature may have other longer-term benefits.

Firstly, it would generally improve the travelling experience for the general public. Nobody wants to turn up to start their journey at an unkempt grotty little station. In the old days (a dubious phrase at the best of times), nobody would. Even the smallest stations would be well turned out with wooden seats, flowerbeds, plant pots and regular painting. Since the 1960s, perhaps even since the 1950s, this standard has not been maintained anywhere but at odd little stations. But just think of the possibilities under BS. Imagine what it would be like to turn up at a station and be greeted by not just by the usual corporate décor, but by an environment which has been tended to by the local residents and reflects their community. The station would truly become the exit or entrance to a community because it would be the first thing visitors would see. This would also, I presume, reduce maintenance costs for the TOCs, reducing the burden on the taxpayer and therefore David Cameron will be satisfied because let’s face it that’s what BS is all about. (A side note: I really wish Cameron would just be honest with us and admit BS is all about cost-cutting, we’re not children!) Initiatives like this also wouldn’t attack union members’ jobs, as in many cases they maintain the superficial aspects of their stations on a voluntary basis anyway through sheer devotion (something truly admirable where it happens).

Secondly, I think that initiatives like this would bring the opportunity to re-establish a long-gone link between the railway staff and the railway users. While I think that in the past the relationship between railway employees and the communities they served was never as strong as collective memory would have us believe; I still think it was 10 times stronger than it is now. I have got sick to death of being treated like a sheep to be herded, which in turn forces me to see railway staff simply as shepherds. Of course there are rare cases where this isn’t the case. Recently a member of staff at Teddington station, Alan Hopgood, got an MBE for his devotion to the travelling public. But this is a unique example. Therefore, I think that if volunteers worked at stations it would create a better bond between the public and the staff which would increase understanding, improve relations and build mutual respect.

Lastly, it may also increase the numbers of people using the railways. If we are to take the above points into consideration, personal investment in the wellbeing of the station and a reconnection with the staff, it may incline more people to use the railway because they will have greater understanding and connections with it. Additionally, growing passenger numbers are always good, as they would increase the revenue for the TOCs and reduce the cost of running the railways. Again, this what I think BS is all about.

There is one problem to all this. What I have presented above is a rosy view of what could be done. There is still the TOCs to get round. Would they really want people clambering all over their stations? Possibly not. I suppose at the end of the day it depends on the ethos of the company concerned. South West Trains I doubt would want anyone ‘alien’ near their operations as their only goal is to have an easy life and make money. Additionally, health and safety legislation and bureaucracy would be a barrier and a deterrent to people getting involved. While I am a fervent advocate for H&S, I do feel that things do need to be simplified at times. Lastly, there is the issue that Cameron has brushed aside but is probably the most important; namely, the numbers of people that could be encouraged to help out. I suppose there are some obvious choices, residents associations, social clubs or even model railway clubs. But at the end of the day do these people really have the time? Well, we’ll see.

On a personal note, I would love to help maintain Hampton Court station, but I too have no time at the moment (and here I am writing a blog). I think that all I have described above is wishful thinking, something I feel is true of the whole BS project. There is one condition though if BS will win my support. You know those ‘community pubs’ Cameron talks about? If any group wants to set one up in the top of Hampton Court Station, I’m in. (NOTE: It must serve at least 5 real ales).