This weekend I winged my way to Norwich by train to see my friends, Matt and Alina. Fun was had by attending a fireworks party, at which I met some lovely people; a pub, which is simply the best that I have ever frequented (The Fat Cat – really, look it up); and a Sci-Fi convention, at which I didn't feel completely at ease, but at least with my background in beer festivals and model railway exhibitions, I did not feel greatly unnerved amongst those who have specialist (and in some cases esoteric) interests.

Either side of this magnificent weekend were two journeys by train which were reflectively uneventful. However, what I realised on the outward journey, were the problems that ticket inspectors, sorry, 'Revenue Protection Officers,' (RPO) have to deal with. I'm not talking about the major incidents, I reckon they are pretty rare. No, I'm talking about the low-intensity conflicts they have with passengers who try and bend the rules. I don't know how many times a day RPOs hear ticket-based excuses, but they must hear some that could even stretch the phrase 'tall tale' to breaking point.

For my example I will recount the tale of the RPO on my journey from London Liverpool Street to Norwich. I boarded the National Express East Anglia train, which seemed to have last had a refurbishment in the 1990s, and settled down at a table seat. The thing about being a PhD student is that every mindless moment, however short, allows PhD type thoughts to slip in. Therefore, being at a table on a train is pure bliss, especially as I had no one opposite me (perfect for leg-stretching) and no one next to me (perfect for bag placing), and I could get my laptop out without bothering anyone.

Over the aisle from me, and a little way up, a woman settled down in her seat. Also, just behind me, another group of individuals were bedding in at a table. I presume they were students from their general demeanour and age. These people were a nuisance, simply because of what happened about an hour into the 1 hour 52 minute journey. The rallying call to attention for all of them was “tickets please.” 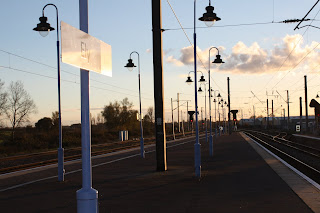 The woman just up from me was reached by the RPO first. She had conveniently forgotten that she couldn't buy Young Persons tickets without possessing a Young Person's Railcard. With no truth in her voice, she stated confidently “well, the ticket machine said 16 to 25 and I thought that meant that you received an automatic discount if you were between...” She was cut off. The revenue protection officer wasn't buying it, and he explained the situation to her. She'd have to pay the excess charge to make the price of the ticket up to a full single.

It was at this point that she again proclaimed that she didn't understand. I suspect this was a stalling method, and the RPO again explained the concept of a railcard to her. After much 'umming' and 'arring' by the woman, the officer lost his rag, but only slightly. “Look” he said with some force, “you have two options. I can let you pay the excess charge, which I shouldn't really do, or, you can pay the full fare of £52.” Faced with this choice, the woman relented, and still mumbled as the RPO moved on.

I produced my ticket, as did a handful of others, and the RPO reached the table behind me. He checked one person's ticket, fine, then another's, and then....oh dear. I heard “can I have your Young Person's Railcard please?” I don't know why it made me laugh inside, but I thought it highly amusing when the last of the group proclaimed “I have a photocopy.” What a pathetic gesture. He had obviously lost his Young Person's Railcard, but was now hoping that he could get away without having one with him.

This, naturally, was not good enough. “Sorry sir” said the RPO, “I will need to see the physical thing.” Because there was some, albeit weak, evidence that a Young Person's Railcard existed, a debate ensued based on this premise. “But why” another of the group proclaimed, “would my friend have a photocopy if he didn't actually have one at home.” The RPO drew himself up and made the very logical argument that anyone could use a computer to doctor an image of a railcard. The response did not have any logic to it. “Yea but is that realistic?” A stupid question, and the RPO said as much. He stated that it had been done in the past, and if they didn't insist on the physical railcard every time, people could potentially get away without paying millions pounds in fares.

Again, this did not satisfy the group, and with a supreme amount of naiveté, one of the culprit's companions piped up, “yea, but we're honest, do we look like criminals?” This was the point at which, for the second time, the RPO gave an ultimatum. “Pay the excess, or the £52, it is up to you.” He also threw in the argument that he couldn't apply one rule for “that person down there” and not enforce it for others. He did, however, throw this chap a bone. If he took the ticket, receipt and the physical railcard to a ticket office, he may be able to get the money back. There were no guarantees though. Naturally, the offender paid up, and after the RPO had left a in depth analysis of the exchange occurred at the table.

The moral of this story is this; RPOs are very jaded to false excuses and the lengths people will go to get round the system, because they deal with cases like the ones cited multiple times a day. As such, it is no point trying to dodge their scrutiny, because, quite clearly, anything you say won't get you out of sticky situations. However, this state of affairs isn't the RPO's fault. Nor is it the fault of those of us who genuinely make mistakes. Rather, it is the fault of all those who try and dodge the system and try to take it for a ride. They are the ones that have ground down any sympathy RPOs may have had...