I believe that Unions are important. After all, I am in one. Unions exist to protect the rights of workers, to ensure that they have safe workplaces, to fight for a fair wage for a days work and to defend their members when harassed. This is why they were created, and this is what their mandate should be. Later today, I find myself venturing to London on the day of the TSSA and RMT’s third one-day tube strike. I’m actually quite lucky. I will arrive at Waterloo and will end my journey at Euston. As such, I will only use the Northern line; one of the few lines that operates a relatively good service when a strike is on. I will not, therefore, have to make one of the many difficult journeys that will be undertaken by other London commuters trying to get from A to B. And all this, because the two unions involved are not behaving like unions are supposed to.

Some weeks ago I wrote three blog entries charting the history of the 1911 railway workers strike which was conducted by Britain's four main railway unions. This action was primarily a response to the fact that the railway companies of Britain paid their employees poorly, while making them work exhaustive hours with poor safety precautions. Therefore, the strike action was a response to a set of circumstances which, by any reasonable measure, needed to be changed. 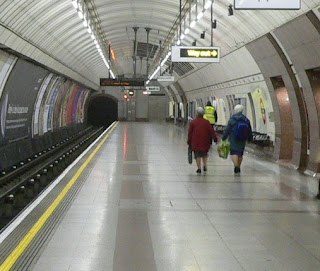 However, this strike action, which is over the closure of ticket offices, is not really about ‘safety,’ pay or even hours. I know that Bob Crow likes to bang on about safety like no tomorrow. But I believe he uses the ‘safety’ argument as a smoke screen to protect revealing his own agenda.

I cannot remember the last time that I purchased a paper underground ticket, maybe two years ago, maybe three? Why exactly do we need to keep so many ticket offices open? The short answer is that we don’t. Over the last 5 years ticket office sales have dropped by 50%, only 1 in 20 journeys start with a visit to a ticket office and 80% of journeys are now made with Oyster cards. Therefore, Transport for London’s (TfL) plans to close many ticket offices across the London Underground network seems, from an economic standpoint, entirely justified. This is an especially pertinent point when these ticket offices are funded by the taxpayer and we are in a time of economic stringency. Of course, this has meant that there will be 800 job losses, but TfL have repeatedly and categorically stated that that this will lead to no compulsory redundancies and no loss of earnings for existing staff. Therefore, the staff reductions will be brought about through ‘natural wastage.’

Yet, Bob Crow repeatedly states that the closure of ticket offices will reduce the safety of the travelling public. Yea right. Think of this, if there is a passenger-related safety issue to be dealt with, it is not the people in the booths who deal with it; it is the individuals in the main station area. Therefore, the reduction of ticket offices will have no effect on how these issues are dealt with within the station. Indeed, I suspect, given that three quarters of ticket offices were actually open on the last strike day, and that it is primarily the drivers and maintenance workers that are on strike, that ticket office workers themselves are unconcerned by the cuts.

Subsequently, if the RMT and TSSA’s members are on strike, but there will be no changes in working conditions for them as they are not the ones who will be affected by the cuts, it begs the question as to why the action has been taken? In my opinion, this is about the unions gaining the political upper hand in the face of future adversity. The RMT are one of the most militant unions, with one of the most hard-headed leaders it has had in a generation. With cuts looming, Bob Crow has long since woken up to the fact that his member's jobs will increasingly come under threat. Therefore, he has used the first industrial relations issue to start to fight his corner, to assert his political position, even though the matter at hand is in reality an issue that doesn't primarily affect the RMT's members.

Thus, he may cry out that the safety of the public is compromised, but in reality, Crow's aim can only be to force TfL into a position whereby he can fight later battles with the upper hand. If the unions won this dispute, it would be like tacit consent being given by TfL that they could not make changes regarding staffing issues without their consent. Thus, in the long run, a successful strike action would mean the RMT and TSSA's members' jobs would be more secure.

However, the problem with Crow hijacking the issue of ticket offices for is own end, is that he is now a bit like the boy that cried wolf. At the end of the day, most of the public can see the need for the ticket office changes and support them. Subsequently, in the future when the unions really need our support with some justifiable strike action because of potential cuts or job-losses, many of us just won’t care because our trust in the RMT and the TSSA will have been eroded to the point of non-existence. Many will no longer see them as protectors of their members, rather, they will be perceived as bullies that cannot face reality.

Thus, there are good ways for unions to act, and this strike action is not one of them.