Buried amongst other news stories yesterday was the news that two companies would be prosecuted over the 2002 Potters Bar rail accident. On the 10th May 2002, at 12.58, the West Anglia Great Northern northbound train, which was travelling at high speed, derailed just outside Potters Bar station. The train passed over a faulty set of points which failed, causing the rear set of wheels to travel onto a parallel line. The train then flipped over and came to rest wedged between the platform and the building structures. Seven people lost their lives and another 76 were injured.

The accident was caused by a collection of maintenance errors. The Health and Safety Executive’s report of May 2003 stated that blots that held one of the points’ stretcher bars in place were either missing or loose. This was despite a full inspection of the points being undertaken on the 1st of May, as well as a visual check having been carried out on the 8th. Indeed, even when on the 9th of May a railway worker travelling on the line reported ‘lethal vibrations,’ poor communication meant that an inspection was conducted on a set of points at the wrong end of the platform. Thus, they did not find the loose bolts. 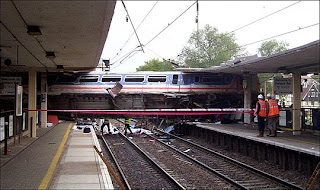 You may have noticed that I have left out the names of the companies that are being prosecuted. In 2005 the Office of Rail Regulation (ORR) decided, on the basis that there was a lack of evidence, not to prosecute two companies responsible for maintaining that section of track in 2002. These companies were Railtrack, who had overall control of maintenance on Britain’s railways, and Jarvis, their subcontractors who were responsible for the section of track in which the accident occurred. However, with the recent conclusion of the inquest into the crash. Ian Prosser, the ORR’s director of safety, now feels in a position to proceed with a prosecution. But, there is a slight problem; neither Railtrack, nor Jarvis, exists anymore. Indeed, the prosecution is proceeding against Network Rail (NR), who took over maintenance of Britain’s rail network from Railtrack, and Jarvis’ administrators, as the company is now in administration

Railtrack was a private company, but one that was very poorly run. After mounting debts and government bailouts, in October 2001 it went into administration. Yet, in May 2002 it was still maintaining the network and the government, while supporting its operations, were investigating ways for it to get out of administration. However, despite all efforts Network Rail took over Railtrack’s assets in October 2002. But with this transfer of infrastructure NR also assumed Railtrack’s legal responsibilities, which now makes it culpable for the Potters Bar accident.

Additionally, Jarvis, an infrastructure subcontractor of Railtrack in 2002, is now in administration and has ceased functioning. Network Rail over the last 8 years has brought much of its maintenance operations in-house and thus, combined with their culpability in the Potter’s Bar accident, much of Jarvis’ decline was because of losing contracts on Britain’s rail network. In addition, and in an effort to generate business, Jarvis also over-extended itself financially in the mid-2000s to the point where its debts were insurmountable. Subsequently, it was placed in administration earlier this year.

Therefore, while the families of those who died in the accident are happy that a prosecution has been brought, it is, sadly, far too late to charge those who were truly responsible. As Louise Christian, the families’ solicitor at the inquest stated, "[a prosecution] has taken place eight and a half years after the event. However, the prosecution is being taken against a company which is in administration and another not for profit company, which is owned by the Government, so the extent to which it can produce accountability may be limited." Indeed, as Network Rail have correctly stated, it is an unrecognisable company from the one they took over eight years ago.

Therefore, I believe that this prosecution comes far too late to make any substantive difference to the standards of infrastructure maintenance on the British railway network. The recently concluded inquest into the Potters Bar accident, rather worryingly, stated that a similar accident could happen soon. However, that is a matter for NR currently and the evidence in the court case will almost certainly focus on the maintenance and procedures Railtrack and Jarvis were operating in May 2002. It will, therefore, not address the way NR currently maintains Britain’s railway infrastructure. The only positive thing that may come out the court case is to further define the line between what constitutes ‘good’ and ‘bad’ maintenance procedures; and any extra definition of that is always welcome.