In my last post I wrote about how fog was a silent killer within the Victorian railway industry. In this post I will look at one of the ways that the industry tried to mitigate its potentially lethal affects. In one respect, this is the story of one technology in particular, the Fog Signal and how it warned drivers of impending danger. In another respect, it is also the story of the Fog Signaller or ‘fogmen’ whose job was probably one of the least technological in the railway industry.

The Fog signal, or more accurately the track detonator, was developed by E .A. Cowper in 1841 as a way to provide an audible signal for drivers when visibility was limited, or at times when there was an emergency. [1] Ordinarily, when the sun was shining and a train driver could see all that was around, the ‘distant’ signal played a role of forewarning him of the status of a ‘home’ signal further ahead. However, in foggy conditions it was quite possible that both were out of sight in the murk. Therefore, fog signal was predominately used to supplement the distant signal. 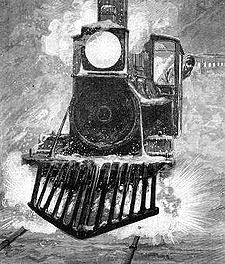 The track detonator, which came to be used throughout the railway industry very quickly after its development, was basically a small, flat, round box, that was attached to the top of the rail. These were placed on the track by the fog signaller, a short distance before the distant signal when it was at danger. Within it was a small explosive charge, which detonated when a train rolled over the top. The driver, alerted to the danger ahead by the explosion, would then be on the lookout for the danger signal or the frantic hand waving from the fog signaller. In response, he would either slow or stop his engine until he had been given the all-clear to proceed.[2]

The poor sod, and I think sod is the correct word, to undertake the placing of fog signals was the fog signaller or fogmen. I wrote a few weeks ago about the dirt of the railway industry, the platelayers, and on many occasions platelayers doubled up as fogmen. However, this job was also taken on by other railway employees such as porters. These men were posted to small huts next to the signal and had to monitor the status of the distant signal constantly so as to know when to place the detonators. Some were also employed as ground men, which could pass messages to the signalmen in the signal box and inform him of the status of the trains.[3] Fogmen typically spent anywhere up to sixteen cold and hungry hours on duty, but for as little as 2d per hour.[4]

Looking at the 1884 London and South Western Railway (L&SWR) rule book, which was almost identical to all other British railway companies’ (they being standardised through the Railway Clearing House in 1876), gives us and insight into the duties of the Fogman. When a fog descended during the day, those employees allocated to be fogmen had to report themselves either to the station master or, if the posting was too far from a station, to the signalman covering a section of the line (Rule 62). If the fog occurred at night, they had to be sent for (Rule 63), and a list of the names and addresses of all fogmen were kept at the stations and signal boxes to facilitate this (Rule 64).

On arrival at the station or signal box they were provided with ‘no less’ that 24 detonators, a hand signal lamp (trimmed and lighted) and a green flag. They would then proceed to the signal where they would work (Rule 65). If during their duty the number of detonators became exhausted, they were to communicate with the station or signal-box and obtain more (Rule 66). If the fog continued for long periods of time, station masters or inspectors were to arrange for a relief to be sent, and station masters were to provide the fogmen with refreshments throughout their duties (Rule 67). It was up to the Station Masters to make sure that the fogmen had proceeded to their posts, and where there were ‘numerous’ along the line, a competent man was to visit them to see if they were doing their duties and to provide them with more detonators if required (Rule 68).[5] Established in the 1840s, this system of operation lasted well into the 20th century.

In a way, the relationship between fog signal and the fog signalman were part of a greater construct of interactions between the railway worker and railway technology that were replicated throughout the Victorian railway industry. While the fog signal itself was undoubtedly an important technological advance that saved many lives, it was still highly dependent on some poor individual sitting in miserable conditions to place them on the line. While today almost all technology serves us as there are safeties that are built in, in some respects, technology in the Victorian railway industry for many railway workers was a wild beast that had to be tamed. Therefore, the adequate functioning of fog signals was served by the misery of the fog signaller.