The Problem with the Late Victorian British Railway Industry

The declining performance of the British railway industry in the late Victorian period is something that I have referred to repeatedly in my blog, but which I have never fully explained. Indeed, this topic is central to my PhD, which will, hopefully, determine how well the London and South Western Railway was managed between 1870 and 1914. Generally, we know that across this period, while gross railway company profits continued to rise, the profit margin of the industry declined.

Probably the best way to measure this decline is through studying the industry’s the operating ratio. This shows what cost of running the railway industry was as a proportion of its total revenue. Using figures provided by Pollins in Britain’s Railways: An Industrial History, the operating ratio for the British railway industry increased as follows between 1870 and 1902:-

Thus, running Britain’s railways became progressively less profitable and more costly. Thus, historians, mostly writing in the 1960s, 70s and 80s, tried to determine why this was so. Yet, there has not been any consensus on the issue.

On the one hand, many historians have argued that the railway industry’s decreasing profitability was caused by external pressures. Ashworth argued that in the mid-1870's traffic growth occurred in low-margin sectors, such as third class passenger and short-haul bulk goods. Companies were subsequently forced into building new facilities because they were too vulnerable financially and politically to refuse carrying traffic. Further, 'pricing and service policies enforced by government and transport pressure groups,' worsened the companies’ situations after this.[1] Irving added to this, arguing that because the public and politicians saw the railways as a service, and put pressure on them to act in such ways, that the companies tried to preserve their commercial freedoms by increasing the 'quality and supply of transport.' This 'involved disproportionate increases in costs and staff.'[2] Further, in an environment where the cost of labour was rising, expensive railway technology was required by law, and there were proportionately falling charges, this meant that the companies' rates of return fell. [3]

On the other hand, the opposing view is that the railway industry became progressively poorly managed over the period 1870 to 1900. Aldcroft accepted that the industry faced the external pressures cited,[4] however, he charged railway managers with a range of failures such as excess line capacity, corporate empire building, under-utilization of fixed equipment, duplicate facilities[5], a failure to relate prices to costs[6] and poor traffic handling.[7] These factors all forced costs up. Further, Cain argued that 'managerial motives,' such as the appointment of overbearing department heads and corporate empire building, were a factor in the decline in profitability. Yet, his main point was that competition between companies increased costs, subsequently doing the greatest damage profitability.[8]

Lastly, Arnold and McCartney, while rejecting the thesis that the railways built too much infrastructure, argued that the period 1870 to 1914 was one of 'structural stasis' in the industry, where the interests of ordinary shareholders were progressively abandoned. In their opinion there was a 'tacit alliance' between railway directors and senior managers that satisfied the short term interests of 'industrial customers and the state.'[9] 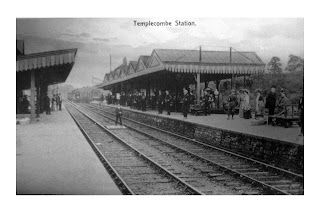 Therefore, the state of play in the literature is that no comprehensive answer has been given to the question of why the railway industry declined in profitability up to 1900. Yet, in that my opinion these studies suffer a sever weakness that hampers their pursuit of an answer. None of these historians looked at what was going within the companies themselves. Rather, these historians only used the financial results of the railway industry to make conclusions about the quality of management. Therefore, in my PhD I hope to look at what was going on within one company, the London and South Western Railway, to determine how the quality of management and decision-making affected the company’s profitability. Hopefully, any answers I find can add to the debate.