The fog that engulfed many parts of the nation on the 29th of October 1856 was the densest that many had seen for some years. In the words of the Morning Chronicle of the 30th, so dense was the fog that ‘persons travelling by the different railways and boats were exposed to imminent danger.’ Indeed, such was the perilous nature of travelling on the river Thames, that the Chronicle reported that many transferred their patronage to the railways. However, on arrival at the station, there was no guarantee that the staff would be there to assist, and it was reported that even with the assistance of the bright tail lights that were used on carriages, guards at Putney were unable to find their way along the roads to work.[1] 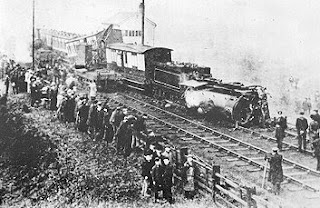 While many became lost and were unable to find their way, some lost their lives to fog by being trampled by horses and carts, and, predictably, by accidents on the railways. The accident report read that William Yeoman (or Houghton), a porter at Wimbledon Station on the London and South Western Railway, was killed while ‘incautiously crossing the line’ in the fog.[2] He was hit in the abdomen by the 11 am down train, and was hurled 15 yards. His mangled body was removed to await examination by the coroner.[3] More horrifically, J. Watkins, a gatekeeper employed by the same railway company at Wandsworth Town, was also killed.[4] Ironically, he was crossing the line to place fog signals for the protection of trains, when he was hit by one. The Chronicle reported that he was ‘knocked down and literally cut in twain.’ His remains were removed to a shed, also to await examination by the coroner.[5]

However, while the L&SWR suffered the loss of employees, on the London and North Western Railway at Wolverton a significant accident occurred. At 3.30 pm a goods train, which contained twenty-five wagons and two damaged locomotives, approached the station. Suddenly the locomotive broke away from the main section of the train and ran down the bank. Fearful of causing an accident, the driver drove the locomotive beyond a point to where his now disconnected train would come to halt. He stopped, and reversed his locomotive to reconnect his load. Yet, his disconnected train had not stopped moving. The fog hindered his view of the oncoming danger, and subsequently the three locomotives and a number of wagons, collided to become what the Examiner called an ‘inextricable mass.’ The driver, apart from being scalded, was generally unharmed. However, his fireman was in a serious condition,[6] and despite being given care, died the next day.[7]

As has been shown, fog was a major problem of that the Victorian railways had to overcome. Indeed, as Richard Foster argued, before the clean air act of 1960, fog was the ‘single greatest impediment to the safe and expeditious working of the railway.’[8] We don’t know how many railway employees and passengers died because of it, but there is no doubt that the numbers were high. Therefore, Victorian railway managers had to face this challenge head on, and in the next post I will examine how they developed tools to overcome this silent killer.

[2] House of Commons Parliamentary Papers - 1857 Session 1 (0.23) Railway accidents. Return of the number and nature of the accidents and the injuries to life and limb which have occurred on all the railways open for traffic in England and Wales, Scotland, and Ireland respectively, from the 1st July to the 31st December 1856.

[4] House of Commons Parliamentary Papers - 1857 Session 1 (0.23) Railway accidents. Return of the number and nature of the accidents and the injuries to life and limb which have occurred on all the railways open for traffic in England and Wales, Scotland, and Ireland respectively, from the 1st July to the 31st December 1856.