If a wagon label could talk

Did you know there is one major question that vexes me as a railway historian? Simply put, it is that I don't know how the railway companies organised the movement of freight wagons before 1914 (and it is vague right up until the 1950s also). Of course we know the logical things, the goods were loaded up in place 'A', were shipped to yard 'B' where they were unloaded. On the face of it, it is all quite simple really. However, knowing this seemingly logical sequence of events does not reveal the myriad of other questions that are still a mystery to me regarding freight's movement.

So, for example, if a wagon was going from Glasgow to Southampton which route did it take? Did it travel by the Great Western Railway (GWR) via Bristol, or make its way via the London and North Western (L&NWR) via London. Also, if in 1893 a wagon had come from the Lancashire and Yorkshire Railway and was going onto Brighton via Birmingham and London, which company took it from Birmingham to London? After all, in this year the city was served by the Midland Railway, the GWR and the L&NWR. Essentially who decided which route it would take and why did they make their choice? There is also the underlying question that I don’t know how companies kept their costs down and whether train controllers naturally developed an awareness of what was the 'cheapest' option with regard to train movements. In all honesty railway historians haven't really had the information to determine the answers to these questions.

But why is this important? Well as I have stated in a number of blog posts before, historians, both past and present, have pointed out that in the period 1870 to 1914 the profitability and performance of the British railway industry declined. In the past historians such as Aldcroft and Cain argued that duplicate facilities, a failure to relate the cost of goods transportation to the rates charged, and managerial empire building caused these problems. More recently a number of econometricians have concluded that there were cost inefficiencies and that productivity within firms did not improve with time. These latter assertions have, however, been made by only using the company's financial returns and without reference to what actually went on within companies. Therefore, how the companies worked out the cheapest way to run their operations is of central importance to me. 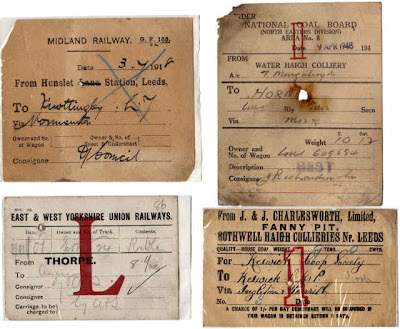 It was on this background that I was musing about the wagon label. It occurred to me that the wagon label is the ‘forgotten’ piece of paper (well card actually) amongst the many varied bits of railway ephemera that survives from the period. Wagon labels were placed on wagons so that those marshalling them through their journeys could attach them to the correct train. Examples of labels are pictured. As you will see various pieces of information are on them, such as where the wagons started their journeys, where they ended them and any major places they went ‘via.’ I presume any location placed under the ‘via’ category was a large goods depot or marshalling yard. They also contain the date of the wagon’s movement.

The 1912 London and South Western Railway (L&SWR) Appendix to the Rules and Regulations stated: ‘Every Wagon or other vehicle (except Empty L.&S.W. Wagons worked on Special Trains consisting wholly of such vehicles running from starting point to destination without intermediate stoppage), whether empty or loaded, despatched by Goods Train must be properly labelled on both sides, and in cases where vehicles are labelled upon Private Sidings the Traders should be requested to conform to this Regulation.’ I think that says it all.

The wagon label is therefore a decision made by one individual at one point in time at one place on the network. As such my challenge is to determine the thinking of the people who wrote out the wagon labels. It should be noted here that this wasn’t actually a management decision. Of course, management would have established the framework for wagon movement and labelling (evidenced above by the quote from the L&SWR’s Appendix), but the actual act of deciding the route a wagon would take (especially when there were two options) was surely decided by an individual based on a range of as yet unknown factors.

For example, perhaps inter-company alliances and rivalries may have meant that certain companies sent wagons moving off their network by one company who was friendly to them, rather than by another company who was their rival. It also may show ingrained inefficiencies. For example, if one particular depot or yard got into the habit of sending rolling stock via one route, when the map clearly evidences that there was a quicker one, this would represent a severe problem of efficiency. So how will I utilise the wagon label?

I do have a plan. I have always been aware that wagon labels in turn up great volumes on ebay and are also held by private collectors. My idea is to gradually (over what I presume will be a very long period of time) gather the transit data off as many wagon labels from the pre-World War One period as I can. Their routes can then be plotted on a map of Britain’s railways from each decade that roughly represents the extent to which it grew. Hopefully, as the routes of more and more wagons are added the major thoroughfares of goods transit can be seen visually. Hopefully this will reveal the way that rail-freight was managed in this nation before 1914 and give a guide as to how the efficiency of the industry changed. The map, when completed, (if it ever will) will possibly show where the inefficiencies were found and some of the factors involved.

However, I do have to confess that in large part this is a bit of wishful thinking. I messaged one of my academic colleagues regarding this embryonic project and he wasn’t optimistic that I could find enough wagon labels to get accurate results. In truth I doubt I will also. But I am one of those insufferable types that likes to stay optimistic. So I will, in line with my PhD, be restricting this project to the L&SWR and using it as a test balloon. At the current time I have 6 wagon labels for the company and are looking for more. I will also still collect off ebay and from anywhere else the details of wagon labels from as many companies as possible so that if it is successful the data can be worked on. All I can say is wish me luck!)…I think I’ll need it. Also if you have any labels, or if you know anybody who does, please send me the details!